Bargain: The Marines Are Getting the M27 Rifle for Half Price 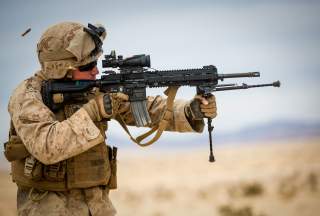 Little more than a month after lawmakers threw a temper tantrum about the cost of each M27 Infantry Automatic Rifle, the Marine Corps has announced it is buying the rifles at a much lower cost per weapon.

In total, the Marine Corps plans to buy 15,000 IARs for $29.4 million from Heckler and Koch over the next five years, Marine Corps Systems Command announced on Friday. Of those weapons, the first 5,660 will cost about $1,300 per weapon.

During a March House Armed Services Committee hearing, lawmakers claimed that the M27 would cost about $3,000 per rifle, or roughly four times the $642 per weapon price tag for the M4 carbine, which the IAR s replacing.

“Until the recent award, procurement integrity laws and regulations have restricted pricing details from disclosure,” a MARCORYSSCOM news release says.

Retired Chief Warrant Officer 5 Christian Wade has long been an advocate for adopting the M27. In a March 28 op-ed for Task & Purpose, he wrote the Marine Corps has years of anecdotal evidence suggesting Marines are highly confident in the weapon.

“The USMC is a ‘people business' and until we replace Marines with robots with AI, personal confidence is an important factor which contributes to the will of a Marine to fight and to believe his leaders are competent and care for him/her,” the former 2nd Marine Division gunner wrote.