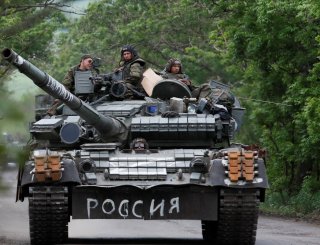 Russian forces have intensified their efforts to encircle a large pocket of Ukrainian troops in the Donbas region.

Ukrainian officials first reported in late April that the Russian military had captured over 80 percent of the country’s Luhansk region, with Russian and Russian-aligned separatist forces pushing pro-government troops out of the settlements of Kreminna, Rubezhne, Svitlodarsk, and Myronivsky.  According to unconfirmed Russian reports, the strategically positioned town of Popasna has fallen under Russian control. Pro-Russian separatist leaders say that they will soon break into the city of Lyman, which lies between Sloviansk and Kreminna.

The advances of the past week have put Russian forces within striking distance of Severodonetsk, one of the last major cities in Luhansk to remain in Ukrainian hands.

“The situation here is difficult because the Russian army has now thrown all [its] forces at capturing the Luhansk region," Serhiy Haidai, governor of Luhansk, said on Ukrainian television.

Russian forces currently have their sights set not on the city itself but on the pocket of Ukrainian forces reportedly grouped between Severodonetsk and the nearby city of Lysychansk. "The enemy has focused its efforts on carrying out an offensive in order to encircle Lysychansk and Severodonetsk," said Haidai.

Conflict mapping since early May shows Russian forces slowly closing in on the Ukrainian position in what appears to be a three-pronged pincer movement. “Every day they are trying to break the line of defense,” Haidai said. Haidai continued: “Round-the-clock there is shelling, and unfortunately the Russian army chose the scorched earth tactic against the city of Severodonetsk: They are simply systematically destroying the city. Everywhere is being shelled constantly.”

Haidai said on Monday that Russian forces have succeeded in destroying all but one bridge into Severodonetsk, threatening to cut the city off from supplies and reinforcements.

The coming battle could prove decisive to the course of the Kremlin’s Donbas campaign. Russian control over the eastern Donbas region would cut Ukraine off from the areas comprising its industrial heartland and fulfill the Kremlin’s key strategic goal of establishing a secure land bridge to Crimea.

If Russia’s military successfully traps and destroys the Ukrainian forces between Severodonetsk and Lysychansk, they will significantly degrade Ukraine’s ability to contest the eastern Donbas region. It is unclear if Ukrainian military units in the Severodonetsk salient are considering plans to retreat further westward in order to avoid potential Russian envelopment.