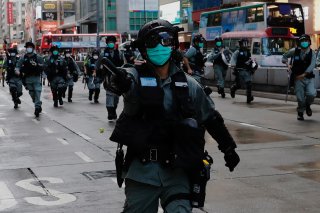 New legislation proposed by the Chinese Communist Party in Beijing is set to allow mainland authorities to directly target anti-government protests in Hong Kong. The effect will be that the Hong Kong authorities would lose local autonomy over this area of policing, practically dismantling one of the core pillars of the “one country, two systems” arrangement between the island and the mainland. To put more bluntly, Beijing is asserting the right to a monopoly on the use of force in Hong Kong, on its own terms—as opposed to the terms of the Sino-British Joint Declaration.

The proposed piece of legislation is likely to be waved through the legislative bodies in Beijing without much discussion, and the only thing standing between Hong Kong and the imposition of de facto direct rule is the response of the people of Hong Kong and of the international community.

There are a number of reasons why this is happening now. First and foremost, both Hong Kongers and the international community are currently more preoccupied with the coronavirus global pandemic. To their credit, Beijing was quite effective at taking control over the pandemic situation after its belated original response, but now they are looking to press their advantage in global affairs, as they are now in a position to exercise initiative while other powers are on the back foot, and absorbed with the domestic handling of the spread of the virus. If ever there was an opportune time for Beijing to press this issue, now would be it.

Secondly, even though the mainland Chinese authorities did manage to take control of the pandemic situation sooner than most other countries, the fact of the matter remains that in the first two months since the emergence of the virus, they bungled it—bungled it badly. And despite the furious propaganda offensive carried out by the regime both domestically and abroad, most Chinese citizens are likely more upset with their leadership in the wake of the pandemic than they might have otherwise been.

As an authoritarian, non-democratic regime, the Communist Party derives its legitimacy from claims of a competent government in the public interest. And the fiasco of failing to contain the virus when it first emerged in Wuhan strikes directly at the heart of the legitimacy of the regime. So, the Chinese government probably saw it imperative to re-engage their domestic audience in some kind of nationalistic project, to get them back on side. The most immediate, hot-button issue for both the Chinese government and for many private citizens on the mainland is the status of Hong Kong and Taiwan—with Hong Kong fresh in their minds following the winter of protests against Beijing in the island nation.

However much we may be distracted by the global pandemic at the moment, we cannot afford to let this pass. If Beijing is allowed to effectively take over Hong Kong by force and crush local democracy, this event will undoubtedly be remembered as the end of the era of liberal democracies on the global stage. Many others will follow, and the next will certainly be Taiwan—a vital U.S. ally and a keystone to American Pacific security. If Beijing is allowed to take Hong Kong in this manner, Taiwan’s days will be numbered. And even in an age of precipitous decline of American global power, it is difficult to imagine how China might take Taiwan without inviting a direct war with the United States.

This all sounds unduly alarmist, but so did those who rang the alarm bells when Nazi Germany re-took the Rhineland in 1936. Once a power with imperial ambitions gets a certain kind of momentum, they will be difficult to stop by any means other than war, and an authoritarian regime at the top of such a power will find themselves equally difficult to stop that momentum, lest they lose domestic legitimacy and perhaps see their entire regime crumble.

Xi Jinping, as a Han nationalist, is happy to play with this fire. But the rest of us have seen this movie before and know how it will end. One only needs to look at the mass incarceration of millions of Uighurs to see how Xi deals with any form of dissent: a fully-fledged cultural genocide. We must stop this here and now. If we fail, we may be setting in motion events that will be much, much more disastrous than even the current pandemic.