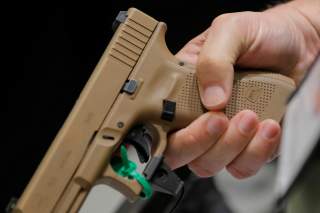 Smith & Wesson’s successful “wonder nine” pistol, the M&P followed in the footsteps of the Glock to produce a highly effective, high capacity polymer frame pistol. The Military & Police Model, currently in version 2.0, has a low bore axis, which the manufacturer claims reduces muzzle climb and allows the shooter to get sights back on target faster. The M&P 2.0 incorporates a five-inch stainless steel barrel into a pistol with an overall length of eight inches.