Battleship Dream Match: What if Japan and America's Best Battleships Slugged It Out? 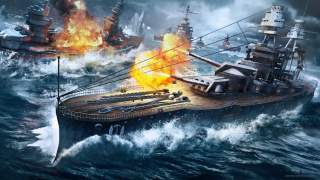 Fast aircraft carriers dominated the opening battles of the Pacific War, from the attack on Pearl Harbor to the Battle of Midway. In part because of the demonstrated lethality of these ships, and in part because of the devastation of much of the U.S. fleet in the opening days of the war, battleships on either side played little role in the conflict. Not until the night battles of Guadalcanal would battleships have a decisive impact.

But what if the Imperial Japanese Navy and the U.S. Pacific Fleet had fought in the way that many had expected, with contending battle lines? Planners during much of the interwar period expected such an engagement, although the details of where, when, and how it would be fought varied over time. If the Pacific War had turned out differently, what might such an engagement have looked like in 1942?

At the beginning of the war, the United States Navy had eight “standard type” battleships at Pearl Harbor, another (USS Colorado) refitting at Puget Sound, and three more (the New Mexico class) in the Atlantic. In addition, North Carolina and Washington had just entered service as the fleet’s first fast battleships. The U.S. Navy also had three older battleships (New York, Texas, and Arkansas) although these were not generally regarded as fit for line of battle service.

Five of these battleships (the “Big Five” Colorado and Tennessee class ships) had not been substantially modernized during the interwar period, but had been constructed after the Battle of Jutland and had incorporated improvements into their design. The rest of the ships had received substantial reconstructions, although the extent varied across classes. The three New Mexico ships may have been the most modern of all (apart from the fast battleships), having received new superstructures, new machinery, and an extensive armor upgrade. In terms of weaponry, the American battleships were generally well-armed. The North Carolinas’ each carried nine 16” guns in three triple turrets, and the Colorados’ eight 16” guns in four twin turrets. Most of the rest of the fleet carried twelve 14” guns in four triple turrets, although the oldest ships only carried ten guns.

For its part, the Imperial Japanese Navy at the end of 1941 had six older super-dreadnoughts, four old battlecruisers (reclassified as fast battleships), and HIJMS Yamato, the world’s largest battleship. The four ships of the Fuso and Ise classes each carried twleve 14” guns in an antiquated distribution scheme (6 twin turrets, including amidships mounts), and had armor generally regarded as substandard compared to the American ships. All four had undergone significant modernization during the interwar period, however. The two excellent Nagatos possessed a more modern armor scheme, had undergone two significant reconstructions during the interwar period, and carried eight 16” guns in four twin turrets. As experience with Kirishima demonstrated during the naval Battle of Guadalcanal, the four Kongo class ships simply could not resist shellfire from battleship guns, and carried only 8 14” guns in four twin turrets. Yamato, of course, carried nine 18.1” guns and was extremely well-armored against shellfire.

Battleship battles only happen because of consensual agreement; it’s difficult to force a battlefleet to engage when it doesn’t want to. For the two battle lines to meet in 1942, each side would have had to believe that they had some degree of advantage, if only fleeting.

The Americans had some wiggle room, mostly because of their responsibilities in the Atlantic. It is certainly unlikely that the Americans would have risked combat with the Japanese battlefleet without North Carolina and Washington, their two most advanced battleships. We can also expect that USS Colorado would have rejoined the Pacific Fleet in short order. Had the Americans entirely denuded the Atlantic of battleships (except for the three older ships), they would have had fourteen battleships to eleven Japanese, including five ships with heavy guns to three Japanese. In the event, the U.S. Navy kept several of its battleships in the Atlantic and proceeded at a leisurely pace regarding the repair and modernization of its older battleships, in large part because no one expected a line-of-battle engagement with the Japanese.

For their part, the most optimal point for the Japanese to engage the Americans would have come in the first six months of 1942. From that point forward that balance began to shift heavily towards the Americans. Four South Dakota class battleship entered service between March and August 1942, while the Japanese answered only with HIJMS Musashi. By 1943 the Iowa class battleships would begin to enter service, along with a massive collection of new cruisers and destroyers. The Imperial Japanese Navy needed to fight in 1942, or not at all.

It’s difficult to sort through exactly where a battleline engagement between the U.S. Navy and IJN would have taken place, although the timing suggests it would not have been in or near the Philippines, which were beyond saving by the time the U.S. Navy could have gathered itself to fight. We can imagine a battle somewhere near the Coral Sea, however, as Port Moresby would have been a major Japanese objective (and a major Allied asset) even without the supremacy of aircraft carriers. Given the fuel demands of deploying the full fleet (which in 1942 would have hit both the IJN and the U.S. Navy), a full sortie would probably have been a one-shot deal.

Assuming the Americans recalled the New Mexicos from the Atlantic and deployed the rest of their fleet, they would have enjoyed a substantial gunnery advantage. By and large the American ships were also more damage resistant. One area in which the Japanese had a major advantage was speed. The American battle line was stuck at a maximum of 21 knots (and some of the older ships, particularly USS Oklahoma, would have struggled to maintain anything close to that) while the slowest Japanese ships could travel at 24 knots. This would have offered the Japanese a significant tactical and operational advantage, although it’s unclear that it would have offset the American gunnery advantages.

The Japanese battleships also had an advantage in terms of their supporting cast. Japan’s interwar cruisers regularly violated the requirements of the Washington and London treaties, enhancing their lethality. The Japanese had also developed the 24” “Long Lance” torpedo with the idea of long-range surface attacks against American battleships in mind. In any world in which aircraft carriers existed, the Japanese as of early 1942 would also have enjoyed a significant, if not insurmountable, advantage over the Americans. Land-based air from Port Moresby and elsewhere might have offset this, however.

As to the course of an engagement, it is impossible to say which fleet would have carried the day. The Japanese would have had an advantage if the battle happened at night, although early radars would have helped the Americans. The biggest Japanese disadvantage came from the relative lightness of much of the battlefleet, especially the Kongos. Subjecting these ships to devastating fire during an engagement could have set off what would amount to a chain reaction, with the destruction or disabling of each ship resulting in more concentration of American fire on the survivors. The Japanese needed their torpedoes to have a major impact on the Americans in order to have a chance of winning, and they needed HIJMS Yamato to provide a decisive advantage. Of this latter, we simply have no good sense of how effective HIJMS Yamato would have proven in a fight against enemy battleships. Her guns would have devastated any of the American vessels, and her armor would have been tough for the U.S. Navy battleships to crack. But as American carrier aircraft demonstrated in 1944 and 1945, Yamato was not invulnerable. Hit anything with enough 14” shells and it will sink.

It is difficult to imagine the Pacific War without carriers playing a dominant role, if only because carrier aviation had already demonstrated its lethality in Europe. But if Japan had made different operational decisions in 1941 and 1942, the possibility of a major battleship engagement might have offered itself. Such a fight probably would have favored the Americans, but would have been a near thing, and would have seen a dreadful toll in men and ships.