Battleship vs. Bomber: The Tirpitz Was the Nazi Battleship that Simply Refused to Die 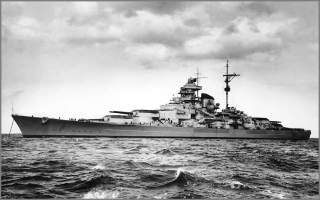 At 3 AM on the morning of November 13, 1944, three airfields in Scotland resonated to a low bass thrum as Rolls-Royce Merlin engines came roaring to life.

Over the course of a half-hour, thirty-two huge four-engine Lancaster heavy bombers from the No. 9 and No. 617 squadrons lifted off into the night sky and, one by one, embarked on long, cold and lonely trips across the Sea of Norway cruising at 200 miles per hour.

Several Lancasters lost their way or had to turn back due to mechanical problems. But twenty-nine of the seven-man bombers managed to slip through a gap in German radar coverage between Mosjoen and Namsos, Norway and rendezvous near Lake Tornetrask.

Once the bombers had assembled, Wing Commander Willie Tate fired a flare gun—signaling the commencement of the attack. They bombers wheeled to the northwest, homing in on a radio-finding signal transmitted by Norweigian resistance agent.

Their target was the gigantic German battleship Tirpitz, a vessel so menacing that for three years the air force and navies of the United Kingdom and Soviet Union had launched at least twenty-five separate air and submarine attacks without ever quite finishing the job.

Would the twenty-sixth attempt succeed?

A companion article describes the earlier misadventures of the battleship Tirpitz, an intimidating German battleship that never engaged enemy warships in combat.

After years of failed attacks by heavy bombers, carrier-based torpedo planes and even frogmen mounted on human torpedoes, the Tirpitz finally was severely damaged by explosive charges laid by two X-Craft mini-submarines in September 1943.

For the next six months, Tirpitz underwent intensive repairs assisted by the repair ship Neumark, even weathering a Soviet air raid early in February 1944 none the worse for wear.

By April 2, 1944, she was back in running order. Having long cracked the Enigma code used by the Kriegsmarine, the Royal Navy was well appraised and dispatched the carriers Victorious and Furious to arrange a suitable reception codenamed Operation Tungsten.

Between 5:30 AM and 6:30 AM on April 3, 1944, two waves of forty Barracuda bombers struck Tirpitz with hulking 1,600-pound armor-piercing bombs, while another forty fighters flew top cover.

Though failing to penetrate Tirpitz’s thick armor belts, they killed over 120 crew and injured around 300 including Captain Hans Meyer, knocked out two 150-millimeter gun turrets, both floatplanes, and blasted holes in her hull, flooding the battleship with over 2,000 tons of water.

No sooner than she had completed repairs, Tirpitz was again crippled.

As Tirpitz recommenced repairs, the Royal Navy was now keen to repeat its success using carrier-based aircraft. But three attempted raids in April and May all failed due to bad weather.

Finally in Operation Mascot on July 17, forty-four Barracuda bombers covered by Corsair, Seafire, Hellcat and Firefly fighters made it to the Tirpitz while she lay anchored at Kaafjord.

But the Barracudas were too slow, with their cruising speed of 195 miles per hour. Despite skimming low over the water to delay radar detection, the Tirpitz still had ample warning time to lay a dense smokescreen. The attacking Fleet Air Army pilots were unable to spot the battleship and inflicted no damage, while three attacking aircraft were lost to defensive fire.

Indeed, by this time, the Tirpitz had her giant 380-millimeter guns and faster-firing 15-centimeter guns modified to serve as long-range air-defense artillery.

The Royal Navy doubled down with Operation Goodwood. Between August 22 and 29, the British carriers Furious, Indefatigable and Formidable, supported by two more escort carriers, launched four separate attacks consisting of sixty to eighty Corsair, Firefly and Hellcat fighters and Barracuda bombers each on the Tirpitz.

Only the third raid managed to inflict any damage when a 1,600-pounder penetrated Tirpitz’s deck but failed to detonate. In exchange, flak around the harbor shot down seventeen aircraft. Worse, a U-Boat attack sank a British frigate and heavily damaged the escort carrier Nabob.

Goodwood revealed that the Fleet Air Arm’s Barracudas were simply too slow to reach the Tirpitz before she could lay down a smokescreen, and couldn’t carry heavy enough bombs to reliably damage the battleship.

As a result, Navy bowed out of the anti-Tirpitz campaign, passing on the mantle to the Royal Air Force’s No. 5 bomber group.

In Operation Paravane, the Royal Air Force first dispatched thirty-nine Tallboy-laden Lancasters from Shetland to Yagodnik, Russia, a voyage in which roughly a third lost their way or had to turn back. The Soviets greeted the crews with movies and a football tournament.

On September 15, twenty-seven Lancasters took off from Yagodnik, most loaded with Tallboys and a half dozen with JW mines, and braved the nearly 100 flak guns defending Tirpitz at Kaafjord. One of the bombs scored a direct hit, penetrating clean through the vessel’s keel and detonating at the bottom of the fjord. The giant hole this torn in the vessel rendered Tirpitz unseaworthy.

At this point, the Kriegsmarine resigned itself to the reality that the Tirpitz could serve as little more than a floating flak battery—designed to draw away attacks from Allied bombers. Accordingly, her crew was downsized from 2,500 to 1,600 personnel.

Still, the Tirpitz was repaired just enough to transit under her own power to her final mooring off Hakoya island near Tromso, Norway. There, she was protected by two anti-aircraft ships, seven fishing boats equipped with smoke generators, and the poorly-trained fighter pilots of Jagdgeschwader 5.

She was attacked again by thirty-two Lancaster bombers on October 31, 1944, flying directly from Scotland. But this time there were no direct hits from Tallboys, though a near-miss did damage her port rudder and cause flooding.

The end finally came with Operation Catechism, as described at the beginning of the article. This time, the German defenses utterly failed to respond in time. While ground-based spotters reported the Lancaster bombers over Norway at 8 AM, the air raid warning was not rung until 8:51.

Forty-five minutes later the Tirpitz’s huge 380-millimeter guns began thundering massive shells up at the massive bombers—to little effect. Only then did nearby German Fw-190 fighters begin scrambling in response—far too late to arrive in time.

Just minutes later, Tall Boys began thumping into the sandbank at the base of the fjord, blasting away sand that had been piled around the Tirpitz to protect her from capsizing.

A Tallboy penetrated the deck between Anton and Bruno turret, but failed to detonate. Then a second hit smashed between the aircraft catapult and funnel and exploded, obliterating the armor belt and blowing open a huge whole in the vessel’s side and belly. A third bomb shattered the Caesar turret.

A camera crew flying in an additional Lancaster recorded the devastation, which you can see here.

Due to a combination of design flaws and poor crew discipline, the Tirpitz both lacked water-tight compartment where she needed them and, and had compartment doors left open that compromised the ship as she took on water.

Within ten minutes, the flooding battleship was listing at 40 degrees and the order was given to abandon her. As the German sailors began swimming to shore, an explosion tossed the massive Caesar turret 25 meters into the air. It landed amidst German sailors swimming for shore, killing many.

Eighty-two lucky sailors were cut out of the capsized hull, which you can see here. Figures variously claim 950 to 1,204 out of the crew of roughly 1,500 were lost.

The bellied-up wreckage remained in the harbor for years before the remains were finally. salvaged between 1948 and 1957.

Churchill, George VI, Roosevelt and Stalin all passed on congratulatory messages to the bomber crew for having finally achieved the destruction of the notorious German battleship, which had never fired a shot at enemy surface ship.

Given the immense resources Germany invested in the Tirpitz, and the huge, sustained efforts the Royal Navy and Air Force undertook to destroy her between 1940 and 1944, military historians still debate whether the Tirpitz amounted to a humiliating failure, or an inglorious kind of success for having forced the Allies to divert such disproportionate resources to contain and eventually destroy her.