Battleships, 1500s Style: How This One Warship From Europe Changed History Forever 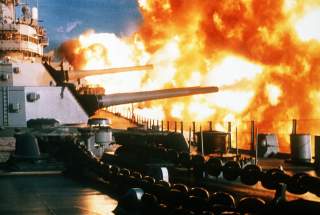 Key point: Concepts appeared in the 1500s which were not fully realized for centuries.

The 1500s were swashbuckling times, when vast empires fought each other for treasure, land and souls.

While Islamic power waxed under the Ottoman sultans and Christian economies burgeoned with New World loot, ideas and inventions old and new flooded Europe and the Mediterranean. They were, indeed, an era much like our own, and those years spawned precocious notions; in a spirit exemplified in Leonardo da Vinci’s inventions, concepts appeared which would not to be fully realized for centuries.

After the loss of Christian lands in the Levant, the famous Crusader order the Knights Hospitaller took their fight with Islam to the sea and became great mariners and buccaneers.

In 1522, the forces of Sultan Suleiman the Magnificent defeated the Knights on the Greek island of Rhodes. Forced from Rhodes, the Knights took the offer made by Emperor Charles V of Spain and moved to the islands of Malta in the central Mediterranean Sea.

However, the day before their defeat—on the winter solstice, December 21, 1522, on the southern coast of France—the sea-crusaders launched a monstrously ambitious ship. The Santa Anna was a grand carrack, great bellied, triple masted, wooden castles towering fore and aft, the very image of the Age of Exploration. Indeed, carracks and their successors the galleons provided the shipping for the great age of European expansion.

The clever combination of the Arab lateen sail with the European square rig brought greater maneuverability. Scaling up the rugged, capacious design of a “cog,” a medieval cargo ship, into the great bulk of the Santa Anna gave the vessel enough room and buoyancy to float fifty bronze cannon and a great deal else besides. The ship could, and did, transport as much as nine hundred tons of wheat.

But Santa Anna was an armored assault ship—its hull was covered with lead plates, each painstakingly hammered into place on the ship’s timbers with bronze nails. The entire hull below the waterline, and two decks above it, were sheathed in metal.

She carried a complement of five hundred marines and complete support facilities as well as the ship's crew and supplies. Below decks a blacksmith’s forge staffed by three smiths maintained and repaired weapons, while an onboard mill ground flour for fresh bread baked in onboard ovens. The elaborate stern galleries high above the ship’s tiller housed a floating flower garden.

But opponents misjudged her if they counted Santa Anna’s great size and fancy appointments against her fighting qualities. In 1531 she single-handedly fought and defeated twenty-five Turkish warships. In 1535, during the Emperor Charles V’s naval campaign against the Barbary corsairs at Tunis, the Santa Anna bombarded the fort guarding the North African port, enabling the capture of one hundred galleys.

Given such a successful career one would think the Santa Anna, like the USS Monitor centuries later, would have pioneered a revolution in naval architecture. Perhaps the fate of another Renaissance battlewagon suggests why.

Later in the sixteenth century what are now the Netherlands and Belgium revolted against Spanish rule and began a long struggle for independence. In ways reminiscent of twentieth century conflicts, the Dutch rebels countered the superpower might of Spain with wondrous weapons. In 1585, to relieve the siege of Antwerp, the rebels employed the world's first known automated weapons of mass destruction—the “hellburners.”

Perhaps inspired by the Santa Anna, or perhaps still enthused by the construction of the hell burners, Antwerp engineers built something that 19th Century Americans would recognize as an ironclad - a low flat floating platform supporting a stout wooden fort sheathed in iron, armed to the teeth with cannon and 1000 musketeers. The warship’s mission was its name: Finis Belli or Fin de la Guerre (“War-Ender”), but its makers’ hopes were in vain. The ship ran aground and stuck under its own weight and was soon captured; the Duke of Parma, commanding the Spanish forces, kept it as a curiosity until Antwerp fell that year.

Like Leonardo's helicopters and tanks, ironclads and giant torpedoes would wait until civilization produced new materials and power sources before entering the arsenal. Such prodigies suggest there may be other weapons out of time, waiting in archives for ages before emerging to trouble the world anew.

Steve Weintz, a frequent contributor to many publications such as WarIsBoring, is a writer, filmmaker, artist, animator. This article first appeared last year.