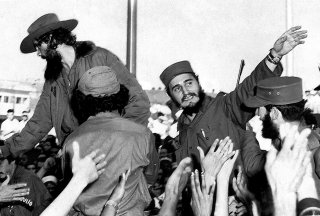 April 17 marks the sixtieth anniversary of the failed invasion at Cuba’s Bay of Pigs. The invasion was the absolute nadir of John F. Kennedy’s presidency, unanimously condemned as the epitome of superpower bullying and an immoral act that violated international law. Even the New Frontier’s most fervent admirers abandoned any effort to defend Kennedy’s policies toward Fidel Castro, choosing to either rewrite history or shift the blame to anyone but the president. This is unfortunate, for John F. Kennedy understood Castroism with greater clarity than those who denounce his “obsession” with Cuba.

A CIA-trained force of fourteen hundred exiles were all captured or killed within seventy-two hours of the landing on April 17, 1961. Castro’s victory was due in part to the lack of the element of surprise which was lost when a bombing campaign directed against the Cuban Air Force began on April 15, two days prior to the landing. Realizing that something was afoot, Castro’s security forces rounded up any suspected “counterrevolutionaries,” dashing the CIA’s hopes for an indigenous uprising in support of the landing force.

President Kennedy refused to commit American air power to provide cover for the invasion force while they were pinned down on the beach, despite pleas from some of his advisors. Additionally, in its post-mortem, the CIA concluded that the Soviet Union had learned around April 9 that the attack was planned for April 17. Despite this serious breach of operational security, which the CIA discovered almost immediately, no one at the agency warned Kennedy that the Soviets had obtained this information. Despite this, the disaster at the Bay of Pigs was of his own making, as Kennedy candidly admitted.

While the Bay of Pigs was a botched “covert” invasion later compounded by botched assassination plots, Kennedy’s warnings about Castro and his intentions proved prescient. Castro’s fifty-year record of repression at home and imperialism abroad confirmed the worst of Kennedy’s fears.

During the Cuban Missile Crisis of 1962, Soviet leader Nikita Khrushchev was shocked at the ease, and intensity, with which Castro argued for a “first strike” against the United States using Soviet nuclear weapons. “El Comandante” was no friend of liberation movements, having endorsed the Soviet invasion of Czechoslovakia in 1968 by arguing that the “Prague Spring” was an attempt by reactionaries to implement “bourgeois” notions such as freedom of the press. Additionally, Castro supported the Soviet invasion of Afghanistan in 1979, an invasion that led to decades of conflict in that troubled nation.

In the years following the Sept. 11, 2001 attacks, Castro accused the United States of “deliberate misinformation” regarding the attack on the Pentagon. In a massive tome released on the sixth anniversary of 9/11, Castro claimed categorically that a plane did not hit the building, and that “The Empire,” his preferred name for the United States, “fooled . . . the planet’s inhabitants.” Castro’s hatred of the United States ran so deep that he rejected Soviet leader Leonid Brezhnev’s attempt to broker a normalization of relations between the United States and Cuba in the early 1970s. Former President Richard Nixon and his National Security Advisor Henry Kissinger were interested in a possible rapprochement, Castro was not.

Cuba became an ally and in some cases an arms supplier to the worst regimes on the planet, including totalitarian North Korea, the theocrats in Iran, the regime of Muammar el-Qaddafi in Libya, Idi Amin in Uganda, Hugo Chavez in Venezuela, and Iraq under Saddam Hussein. In the latter case, Castro dispatched a team of Cuban doctors in the 1980s to keep the Iraqi dictator in good health. During Castro’s reign, the Cuban military intervened in Algeria, Zaire, Bolivia, Vietnam, Angola, Syria, Nicaragua, Grenada, Yemen, and Eritrea, where it helped a socialist government snuff out an independence movement from Ethiopia. Castro’s military interventionism was supported by one of the most effective intelligence organizations in the world, his Dirección de Inteligencia (DI) which circulated disinformation globally and ran circles around the American FBI and CIA, all the while penetrating the Cuban exile community and various United States government entities.

“I was fighting for my ideals”

Although John F. Kennedy was right to view Castro as an enemy of the United States, he, and his successors, while maintaining the embargo against Cuba for decades, could never overcome European, Canadian, and Latin American opinion that the United States was, as Kennedy reported them saying, “demented” and “fixated” when it came to Cuba. But U.S. policymakers saw Castro more clearly than those who considered the American “fixation” on Cuba to be rehashed imperialism from the days of William McKinley’s “splendid little war.”

Those Cubans who fought and died at the Bay of Pigs and elsewhere to remove the dictator who betrayed their revolution have been subjected to slurs for over sixty years. They are often portrayed as “right-wing extremists” or “fascists,” or at best, paid mercenaries of the Central Intelligence Agency. Some anti-Castro Cubans did hold extreme right-wing views, while many did not. But this distinction did not matter, as a DI disinformation campaign succeeded in convincing many in the west that the entire anti-Castro community was nothing but a plutocratic elite intent on restoring authoritarian rule.

There are ample legal and moral grounds to condemn the Bay of Pigs invasion and the subsequent campaign to assassinate Castro. But one can condemn these actions while conceding that Kennedy grasped the true nature of Castro’s pro-Soviet, imperialistic dictatorship. Kennedy described the Bay of Pigs veterans as soldiers who fought to restore “the original stated principles of the Cuban revolution” which were “political liberty, social justice, intellectual freedom and an end to economic exploitation.” Instead of this, they were given “a police state, the elimination of the dignity of land ownership, the destruction of free speech and press, and the complete subjection of individual human welfare to the service of the state.” All of this was the result of the actions of “the despots of Havana” who had “cruelly betrayed” the original purpose of the revolution.

One veteran of the Bay of Pigs operation summed-up the attitude of most of the Cuban exiles who participated in the ill-fated invasion and remained determined to bring down the Castro dictatorship. Alfredo Duran, who was no “right-wing extremist” and advocated dialogue with the Castro regime in his later years, noted on the invasion’s fiftieth anniversary:

I obviously not only believed that it was legitimate, I believed it was my duty to do so. I was a young man and I was fighting for my ideals and for what I believed was the best for Cuba…. I don’t think that anybody that was in the Bay of Pigs felt that they were working for the CIA. We all felt that we were using the CIA to obtain our objective, which was to bring democracy and freedom to Cuba. So to me, it was not only perfectly legitimate, but it was my obligation to do so, and it was the right thing to do.

It was the right thing to do, and all the world, including the people of Cuba, would have been better off if they had succeeded.

Stephen F. Knott is coauthor of Washington and Hamilton: The Alliance That Forged America and a professor at the United States Naval War College.