For Beach Assaults, the U.S. Navy Could Get Creative 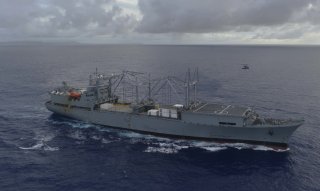 It’s no secret that the U.S. Navy doesn’t have enough amphibious ships. The U.S. Marine Corps, which rides the amphibs into battle, until recently said it needed 38 of the ships — and could make do with 33, in a pinch. But Congress hasn’t been willing to pay for the vessels, which can cost a billion dollars or more apiece.

Today the Navy has 32 amphibs. The Navy and Marines both are conducting studies that could result in a radically new design for the amphibious fleet, potentially trading big expensive vessels for larger numbers of smaller, cheaper ships.

And it turns out that Military Sealift Command, the Navy’s quasi-civilian specialist branch, has lots of useful ships lying around mostly idle that, with some imagination, can partially fill in for multi-billion-dollar amphibs.

Take, for example, MSC’s two aviation logistics ships — S.S. Wright and S.S. Curtiss. Six hundred-and-two feet long, displacing 24,000 tons fully loaded, the twin loggies each boasts a large helicopter landing pad, multiple cranes and a full-length cargo hold opening onto ramps on its sides and stern. With a crew of just 41, each of the vessels can accommodate more than 360 passengers.

While less tough than dedicated amphibs and totally lacking defensive weaponry, under the right circumstances the aviation logistics ships could embark potentially hundreds of Marines and their vehicles plus thousands of tons of supplies. Joining other specialized ships, the loggies could help send the Leathernecks ashore to invade an enemy, defend an ally or help out following a natural disaster.

Curtiss and Wright have been mostly idle for the 30 years they’ve been in government service. Both vessels began life in the late 1960s as commercial cargo ships. The Navy acquired Wright in 1986 and Curtiss in 1987 and outfitted them as floating depots for helicopter mechanics — T-AVBs, in MSC nomenclature.

The idea was that, during wartime, the T-AVBs would tie up alongside a pier just behind the front lines of some foreign war zone. The Marines on the ground would send their damaged and broken copters back to the loggies for repairs.

But Curtiss and Wright have rarely performed that specific role. Both vessels activated for the 1991 Gulf War. Wright also supported the 2003 invasion of Iraq. Wright helped out the relief efforts in the wake of Hurricane Sandy in 2012, tying up on Staten Island as temporary lodging for aid workers. Otherwise, the T-AVBs mostly sit inactive — Wright in Baltimore, Curtiss in San Diego.

But the Navy and Marines are waking up to the vessels’ utility. “These are vessels are not amphibious ships as we know them, but quite frankly, Marines, we’ve been operating off these ships in varying degrees for years,” Jim Strock, whose job it is to brainstorm new “seabasing” ideas for the Corps, told the U.S. Naval Institute’s news site.

According to the site, the Navy conducted a test during the summer of 2015, using a crane aboard one of the T-AVBs to lift a flat-bottom landing craft onto the vessel. Curtis participated in the amphibious exercises Valiant Shield in 2018 and Pacific Blitz in 2019.

In theory, Curtiss and Wright could embark Marines and landing craft, anchor offshore, drop the craft into the water and then load infantry into the craft for the choppy ride ashore. World War II-style.

More likely, the T-AVBs would plug into a seabase — a sort of constellation of special cargo ships, each performing a niche role housing, transferring and sending Marines onto a beach. The Navy — and MSC, in particular — has been working hard on new seabasing technology for several years now.

Here’s how a seabase could work. Cargo ships carrying Marines and their vehicles could converge on an anchorage 25 miles or so from shore. With Navy destroyers protecting against air and sea attack, the transports could join “skin-to-skin” or connect via floating docks called “lighterage.” With helicopters and catamarans assisting, the vessels could shuffle people and vehicles, prepping them to move ashore.

Next, a Mobile Landing Platform — the Navy is building several of them — would connect to the cargo ships. The MLP can partially submerge, flooding its deck so that hovercraft and landing craft can motor on and off. The other ships in the seabase connect Marines to the MLP; the MLP gets the Marines into the landing craft that haul them to the beach.

Working together, the seabasing ships mostly duplicate the functions of purpose-built amphibs. The major difference is the amphib’s weaponry, high-tech communications gear and toughness. For a major war, you’d want amphibs. For somewhat more routine ops, a seabase — potentially including Curtiss and Wright — could suffice.

To be clear, the Navy is considering new roles for the aviation logistics ships because it, and the whole U.S. military, is running out of money. But that doesn’t mean sending the T-AVBs on an amphibious assault isn’t a fantastic idea. “The best solution isn’t always the fanciest or the most expensive,” former U.S. defense secretary Bob Gates once said.