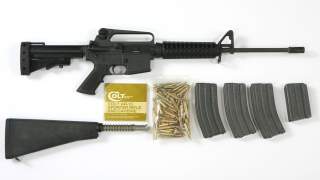 The cons of using this round include the high level of barrel erosion, price of ammunition, and difficulty in finding proper magazines. Basic parts like the bolt and barrel are expensive as well; the bolt alone might cost you more than $300.

The Grendel magazines are an odd, banana shape like those for the AK, which isn’t bad in itself, but they’re awkward with the lower receiver of the AR-15. And the 6.5mm bore can burn out quickly, which isn’t usually a problem because the ammo is expensive and rare.

The 6.8 round was developed for the Army’s marksmanship unit. It was intended as a long-range option for the M4 and they wanted a round to work well for light field use along with exhibition shooting.

It was considered along with the .300 Blackout and 6.5 Grendel as a replacement for the 5.56. Though it performed well at ranges over 250 yards, there wasn’t much point for military use, since any military engagement generally occurs at less than the 250-yard mark. Bison Arms makes some 6.8 SPC Uppers for the AR.

This is an excellent round for short-range hunting because it goes further than a .300 Blackout and hits harder than the 5.56.

You’ll need to change the barrel and bolt and you can even find them in a package deal, but one disadvantage to the 6.8 is the lack of availability in magazines.

The .458 SOCOM was developed for special operations forces to have some serious punch in close quarters battle. It saw some action in the Middle East because it’s such a man stopper and could be easily suppressed.

It beats other big bore AR cartridges because it performs admirably in a short barrel and rounds are readily available. You can look over some .458 SOCOM AR-15 uppers at Wilson Combat.

This round is a necked down .50AE (think of the Desert Eagle) that uses a rapid burning powder and a heavy bullet, making it ideal for SBRs and suppressors.

The .458 isn’t like the .300, whose subsonic rounds make it impractical for hunting. Its 350gr slugs can be used to hunt thin-skinned game within 75 yards.

With subsonic ammo, you’ll see performance like a souped-up .45 Colt and with supersonic rounds, you’ll think you’re using a .45-70 wrapped in an AR-15 package deal.

This is the round that started the big bore AR-15 concept. It’s said to have been developed by the same people who designed the 6.5 Grendel for military use in stopping vehicles at checkpoints as an aid to car bomb prevention. Alexander Armsproduces .50 Beowulf uppers for the AR-15.

This monster round packs a punch at both ends and empties your wallet in the process. But the rounds are only produced by a few manufacturers and don’t have premium options for performance hunting.

To keep yourself in ammo, you’ll probably have to learn how to reload. If you’d like to try your hand at reloading, check out our Complete Beginner’s Guide to Reloading Ammo.

PROS AND CONS OF THE .50 BEOWULF

There’s no real advantage to this round for home defense; it’s just as effective as an M855 5.56 round and is a deep penetrating bullet. Likely, it would fully penetrate a bad guy and keep going.

For hunting, it’s powerful enough to take down anything in North America, but the key is to get close to your target and use bullets that open reliably to dump all its energy in your target.

As mentioned above, ammunition is rare and costly. If you really have your heart set on the .50 Beowulf, then you’d be better off learning how to reload if you want to have ammunition at all times.

SOME CARTRIDGES TO AVOID

Now that we’ve discussed some excellent options for AR cartridge upgrades, let’s talk a bit about cartridges to avoid, because there are some of those, too.

This was Russia’s answer to the 5.56 M16 in battle for the AK-74. It’s been maiming soldiers since the 1970s and has a horrible reputation.

When used by some bad guys in Afghanistan, these rounds blew up or ricocheted when they hit something like a wall. They didn’t penetrate well, nor did they kill efficiently; they were more likely to cause superficial wounds.

Years ago, the market was flooded with this ammunition, but that source has now dried up. Changing your AR to this configuration won’t gain you any benefits, except possibly cheaper ammo. But overall, it gives you a less effective firearm.

This true .30 caliber cartridge fires its 120gr bullets at close to 2200fps from a rifle barrel. While this sounds ideal, it’s really not.

It’s a tapered casing and requires an exaggerated, curved magazine and custom lowers to perform well. It also uses a steel cased ammo with a polymer coating; this doesn’t work well in direct impingement weapons that use the gas from a fired round to cycle the action and reload the next round.

This round isn’t any better than the .330 Blackout and you can’t find it in as many loads. It’s also not easily suppressed, so you’re probably better off going to the .300 Blackout.

But if you’re completely sold on the 7.62, make sure to find a custom lower receiver that moves the pistol grip back to accommodate the magazine required.

When you’re looking to upgrade your AR-15, you’ll need to consider a compromise between power, cost, and availability of parts and ammunition.

Some AR upgrades come with a high price tag, so you might need to learn about reloading ammo if your heart is set on these cartridges.

In addition, some of these newer cartridges may fade away in the future, so you may end up doing another upgrade if your rounds disappear.

Decide what’s the most important job you’re upgrading for: is it hunting, competition, or home defense?

The answer to this question will get you closer to choosing the right cartridge upgrade for your AR-15.