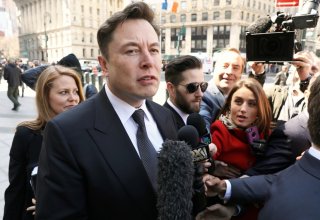 China’s Foreign Ministry accused the United States of endangering the safety of its “Tiangong” space station on Tuesday, claiming that satellites launched by U.S. aerospace manufacturer SpaceX nearly collided with the station on two separate occasions.

According to Foreign Ministry spokesman Zhao Lijian, the station engaged in evasive maneuvers twice in six months—once on July 1, and a second time on October 21—in order to avoid being hit by SpaceX’s “Starlink” satellites. Zhao argued that the consequences of a collision would be particularly severe because three Chinese astronauts were aboard the station during both incidents.

Zhao insisted that the U.S. government should “take immediate measures to prevent such incidents from happening again.”

The Chinese government also lodged an official complaint with the UN Committee on the Peaceful Uses of Outer Space in early December, arguing that the U.S. had violated a 1967 treaty obliging it to “protect the safety of astronauts” as part of a broader attempt to prevent the militarization of space.

China’s ongoing Tiangong mission is being conducted in two stages. The first trio of astronauts arrived on the station in April and remained for ninety days before returning to Earth in September; they were replaced by a second three-man crew in mid-October, which is scheduled to return to Earth in the spring of 2022. Both crews took evasive maneuvers to avoid Starlink satellites, according to the Foreign Ministry.

SpaceX’s Starlink program, which is intended to provide global satellite internet service, has come under criticism from other sources, including the European Space Agency (ESA), whose Director-General Aschbacher argued that the company’s satellites would obstruct the path of other future launches.

Elon Musk, SpaceX CEO and the world’s richest person, brushed off Aschbacher’s criticisms of the Starlink program in an interview with the Financial Times.

“Space is just extremely enormous, and satellites are very tiny,” the entrepreneur told the newspaper.

An estimated 30,000 man-made satellites or pieces of space debris are orbiting Earth. As space debris is more or less impossible to remove and poses a risk to spacecraft, its presence in Earth’s orbit has been a growing concern among the world’s space agencies for several decades.

In addition to leading SpaceX, Musk is the “Techno-King” (CEO) of electric car manufacturer Tesla, which opened its first foreign factory in Shanghai in 2019.