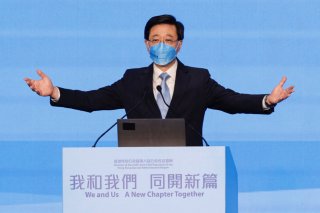 Lee, who faced no opponents, won a decisive majority of 1,416 of the votes cast by the committee. Eight members of the committee opted not to support him.

Lee is scheduled to swap out for Carrie Lam, the country’s embattled chief executive, who has held the position since 2017 and became the widespread target of pro-democracy, anti-government protests in 2019. Once he takes office, Lee will be the first chief executive in Hong Kong’s post-1997 history with substantial law enforcement experience.

Among pro-Beijing lawmakers, Lee is more famous because he oversaw Hong Kong’s response to the 2019 protest movement—protests that were eventually crushed following a government crackdown and the onset of the COVID-19 pandemic. Lee was also associated with the passage of the controversial national security law, a directive issued by Beijing allowing Chinese authorities to arrest journalists and dissidents for nearly any writing that could be said to undermine Chinese rule over Hong Kong. In the years since the law’s passage, several Hong Kong newspapers have closed their doors, and a handful of high-profile opposition journalists—most notably Apple Daily founder Jimmy Lai—have been arrested and sentenced to prison. Consequently, Hong Kong, once at the top of Asia’s rankings for press freedom, has steadily declined on the list, roughly halving in position in Reporters Without Borders’ rankings.

In his acceptance speech, Lee thanked the members of the Election Committee for his victory. He also vowed to improve Hong Kong’s reputation abroad, claiming that the territory needed to be restored in the global imagination as an international business hub. He made little mention of the protests or the national security law, which remain polarizing topics in Hong Kong. Although most street demonstrations have faded, at least three protesters from the League of Social Democrats, a pro-democracy party, stood outside the convention hall to protest Lee’s election. The territory’s police were also present to ensure they did not approach the building.

Lee is scheduled to take office on July 1, upon Lam’s retirement.

Trevor Filseth is a current and foreign affairs writer for the National Interest.
Image: Reuters.