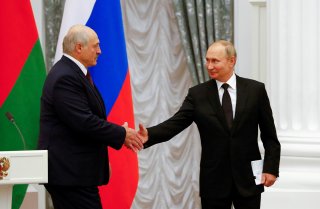 Belarusian president Alexander Lukashenko said on Thursday that he was willing to host Russian nuclear weapons on Belarusian soil if the Eastern European country faced an external threat.

Lukashenko’s offer comes as roughly 150,000 Russian troops have gathered on the Russo-Ukrainian border, raising fears that the Kremlin plans to invade Ukraine. Although Belarus is not directly involved in the confrontation between the two countries, tens of thousands of Russian troops are currently engaged in military exercises near Belarus’s border with Ukraine. Some experts in the West have warned that Russia could use Belarus as a staging area to invade Ukraine from the north, as the country’s capital, Kyiv, is less than one hundred miles from the Belarusian border.

Lukashenko previously said that Belarus would remain neutral in any potential conflict, and would only become involved if Belarus was attacked.

“If necessary, if such stupid and mindless steps are taken by our rivals and opponents, we will deploy not only nuclear weapons, but super-nuclear and up-and-coming ones to protect our territory,” Lukashenko said, according to Belarus’s state-run Belta news agency.

However, Lukashenko also that the weapons would not be “needed here for a hundred years” as long as Belarus was not threatened by any unfriendly countries, according to CBS News.

Belarus does not currently possess any nuclear weapons. It briefly inherited a handful of nuclear warheads after the breakup of the Soviet Union in 1991, but returned them to Russia as part of the Lisbon Protocol in 1995.

There is also no legal basis for the deployment of foreign nuclear weapons within Belarus – a fact that Lukashenko has noted in the past. However, Belarus is holding a constitutional referendum later this month that includes a vote that would make it legal to host Russian nuclear weapons.

More importantly for many Belarusians, the constitutional referendum could also extend Lukashenko’s presidency. It would allow him to serve until 2035 if successively re-elected in 2025 and 2030.

Lukashenko, who has ruled Belarus since 1994, faced international criticism in 2020 after claiming victory in an election widely alleged to be fraudulent in the West. That election spawned a year-long protest movement demanding his resignation, which was ultimately put down in mid-2021 through a crackdown by security forces.

That crackdown led to a wave of European sanctions on Belarus, pushing Lukashenko to forge closer ties with the Kremlin.