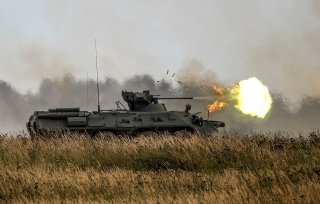 The second batch of Russian-made BTR-82A armored personnel carriers (APCs) were delivered to Belarus this week. They will enter service with a mechanized brigade stationed in the western Grodno Region, the Belarusian Defense Ministry’s press office announced on Thursday. A previous batch of the advanced APCs was supplied to an unspecified Belarusian unit with the 72nd Joint Training Centre and Belarusian military academy in September for training purposes.

"A train with BTR-82A armored personnel carriers has arrived from the town of Arzamas in the Russian Federation to the Grodno garrison for the 6th separate Guards mechanized brigade," the Belarusian Defense Ministry said in a statement, according to TASS.

"This is a planned delivery of military hardware from the Russian Federation under the planned rearmament of the armed forces of our state," said Brigade Commander Dmitry Mitskevich.

According to a report from Janes, the exported BTR-82As have been fitted with Belarusian components including communications suites by JSC Agat-System and sighting systems by JSC Peleng. Designed by Russia's Military-Industrial Company (VPK), the APCs weigh about 16,000 kgs, and each carry a total of seven service personnel. Each is armed with a 2A72 30 mm automatic cannon and Kalashnikov PKTM 7.62 mm coaxial machine gun.

The BTR-82A is an advanced 8x8 wheeled vehicle already in use with the armies of Russia, Azerbaijan, and Kazakhstan. The first prototype of the vehicle was unveiled in December 2009, while its features were demonstrated during the 15th Interpolitex State Security Materiel Show at the All-Russia Exhibition Centre in Moscow in October 2011. The APC was also displayed at the Russian Expo Arms show in Nizhny Tagil in 2011.

Christmas has come early for the Belarusian Defense Ministry as it has received the second batch. TASS reported that the Commander of the Western Operational Command Major General Igor Demidenko said that the personnel of a battalion of the mechanized brigade have already undergone training at the 72nd Guards Joint Training Center for Warrant Officers and Junior Specialists.

In addition to the BTR-82A armored personnel carriers, the Belarusian Defense Ministry has also taken delivery of BTR-80K command vehicles and BMM armored medical vehicles, which have been deployed with the Belarusian Army's 6th mechanized brigade.

Pakistani Interest in the APC

Another potential buyer of the APC could be Pakistan, which was given a chance to test-drive the BTR-82A during the joint Druzhba-2021 drills with the Russian military. Pakistani Special Forces showed interest in the Russian-built vehicle, which would seem well-suited to the rugged terrain along the Pakistan-India border.

"The guests were especially interested in the modern armoured personnel carriers BTR-82A, from which officers of the Pakistani special forces unit opened fire," the press service of the Russian Southern Military District said via a statement, reported by the Economic Times of India. "Most of all, the Pakistanis liked the easy control and the accuracy of shooting from the weapons of the modern armoured personnel car."