Bernie on the Offensive in Thursday Debate 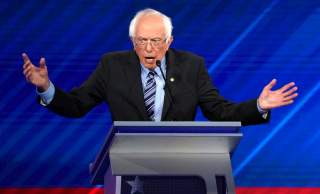 Democratic presidential candidate Bernie Sanders was reportedly the most aggressive out of all 10 candidates on stage at ABC News’ presidential debate Thursday, according to an NBC News Graphics tally.

NBC tracked the verbal attacks hurled by the Democratic candidates throughout the night, representing the direction and subject of each attack in a graphic posted to Twitter.

There was a total of 60 attacks launched by candidates during Thursday night’s debate, according to NBC’s count.

Wall Street and corporations were attacked a total of 11 times and the “ultra-rich” faced three attacks from candidates.

Sanders most frequently went after corporations, the “ultra-rich,” Trump and Biden, according to NBC.