Bernie Sanders Could Be Unstoppable if He Wins South Carolina 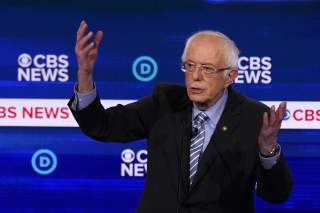 In October, former Vice President Joe Biden led the field in South Carolina by a whopping 25 percentage points. His support among African Americans, who are expected to comprise two-thirds of the Democratic primary electorate when the Palmetto State goes to the polls on February 29, was sky-high. It was literally his race to lose.

It was inconceivable back then, but there is a chance today that the veep may actually lose it. NBC News and Marist released a poll on Tuesday, February 25, showing Biden up by only 4 points against Bernie Sanders, well within the margin of error. The poll was horrible news for Biden, whose entire presidential campaign rests on a win in South Carolina this Saturday. President Barack Obama’s top lieutenant may put on a brave and confident front during public speeches, but Biden understood he needed to use Tuesday night’s debate as an opportunity to remind Democrats in South Carolina why they’ve always loved him.

During previous debates, Biden was passive, respected the clock, and at times seemed confused and wistful. That wasn’t so this time, where Biden was loud and aggressive, shouting into the microphone as if everybody watching him on television had hearing problems. He looked disgusted as his opponents were yelling over each other and complained to the moderators about the rules not being adhered to. Towards the end, Biden lost it, blaring through the time limits to get his point across. He jabbed his finger in the air a couple of times as he abraded Donald Trump for meeting with North Korean leader Kim Jong-un, clenched his face when he raked Chinese President Xi Jinping over the coals for his dictatorial ways, and stared directly at Tom Steyer as he condemned the California billionaire for investing in private, for-profit prisons.

We knew going into this debate that every candidate on stage would aim their fire at Bernie Sanders, the presumed frontrunner.  Michael Bloomberg’s campaign telegraphed a day before that the whole purpose of the objective New York City mayor’s strategy was to bring the senator down a peg. Biden, too, was going to hammer Bernie’s record; his operation aired an ad that cast Sanders as a selfish backstabber who prepared to primary Barack Obama during his 2012 re-election bid. The sparks were going to fly.

And fly they did. Pete Buttigieg, who has sold himself since the New Hampshire primary as the Democratic Party’s best alternative to a Sanders nomination, pointed at the high costs of the Vermont senator’s Medicare-for-All proposal. Sen. Amy Klobuchar did the same, saying that “[t]he math does not add up.” Bernie’s record on gun safety was brought up by Biden, who reminded viewers that it was Sanders who voted to shield gun manufacturers from criminal liability. Everybody took Sanders on for his comments about the late Fidel Castro on 60 Minutes two days earlier, where the progressive leader complimented the Cuban dictator for Cuba’s literacy rate. For a few minutes, the men and women who were competing for the 2020 Democratic presidential nomination were arguing about U.S. policy in Latin America in the 1970’s and 1980’s as if the Cold War was still going on. The whole thing was too much for Buttigieg, who reminded everybody in the room that we were in the 21st century.

Who won the debate in South Carolina? Who knows. Biden was better, but that isn’t saying much given his other performances over the last eight months. Buttigieg was the usual Buttigieg. Massachusetts Sen. Elizabeth Warren gobbled up as much time as she could in a last-ditch effort to catapult herself into the top tier, but it likely didn’t work. Bloomberg was less of a disaster than his jokes, but still unimpressive (to put a charitable spin on it). Klobuchar kept talking and talking and talking, but whether anybody was actually listening is an entirely different question. Steyer was…well…who cares? And Sanders, who admitted to 60 Minutes’ Anderson Cooper that it felt strange to be in the position of the frontrunner, did a decent job deflecting attacks from all directions.

In the end, it may not matter who won or lost the debate. Warren’s presence on stage last week was strong but when the time came for counting the votes in Nevada, she didn’t break double-digits. These rhetorical contests are like gladiator games for politicians, except a lot of the spectators watching fall asleep in the middle of it.

One thing, however, is for sure: if Bernie Sanders manages to pull off an upset win over Joe Biden in South Carolina this weekend, it’s hard to envision the other candidates stopping the "democratic socialist” from running away with the nomination.