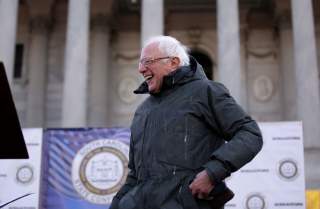 Key Point: The arms industry knows what they're doing when they put factories in certain states.

In a farewell ceremony on April 7, 2019, the Green Mountain state’s fighter pilots took their F-16 Fighting Falcon jets out for a last spin before the type’s retirement, as you can see in this video.

Since 1986, the Vermont Air National Guard’s 158th Fighter Wing has flown single-engine F-16C and D Fighting Falcon fighter jets out of Burlington International Airport. The “Green Mountain Boys” of the 158th have deployed on combat missions overseas several times, and were the first to provide air cover over New York City following the 9/11 terrorist attacks in 2001.

Arriving this September to replace them are the first of eighteen land-based F-35A stealth jets, plus two spares. Though marginally less agile than “Viper,” the F-35As are more survivable in most combat scenarios due to their reduced visibility on radar and powerful long-range sensors.

However, local Vermonters are concerned about one parameter in which the F-35 may be decidedly indiscrete: its Pratt & Whitney F135 turbofan engines may be noisier than the F-16’s—allegedly, by as much as a factor of four. The Air Force’s own study reported this would expose a thousand homes to noise levels exceeding 65 decibels, a noise level considered “unsuitable.”

In an unusual turn, this has pitted anti-F-35 activists in opposition to both of Vermont’s left-leaning senators, independent Bernie Sanders and Democrat Patrick Leahy, who have supported the F-35’s deployment in Burlington. For example, this September 6, activists planned a “Weekend at Bernie's” rally at Leahy and Sander’s Burlington offices opposing the F-35’s imminent arrival.

Supporters of the anti-F-35 campaign “Save our Skies” have included retired Air Force colonel Rosanne Greco who was formerly involved nuclear arms negotiations; Pierre Sprey, an influential weapons analyst in the 1970s and a longtime F-35 critic; and Ben Cohen of Ben & Jerry’s ice cream company who has provided financing.

South Burlingtonians living near the airport were already reportedly unhappy with the noise produced by the now-retired F-16s. In response, the airport actively purchased and razed over 200 adjacent homes to reduce the affected population. Opponents to F-35 basing particularly cite studies showing that children growing up near noisy airports tend to suffer adverse health and educational attainment outcomes.

In 2013, the National Guard also released an Environmental Impact Statement that asserted that the additional noise impact would be minimal. However, locals have questioned the assessment model.

It was eventually revealed that Burlington was the least well-rated of four sites evaluated by the Environmental Impact Statement, and its selection may have been pushed specifically by Senator Leahy. Furthermore, leaked emails revealed the National Guard had developed a new noise model (Karnes 3) over the objections of the Air Force with the intention of favorably tweaking the noise assessment.

Furthermore, the study’s noise model was apparently based on the assumption that the local F-35s would only use their afterburners about 5 percent of the time. Afterburners trade away fuel economy to increase turbofans maximum thrust from 28,000 to 44,000 pounds—with corresponding effects on noise levels. However, documents uncovered in August suggest that F-35s will engage their afterburners in roughly half of their missions, not 5 percent of them—particularly as the airport’s shorter runway may require combat-loaded aircraft build up additional thrust when taking off.

Moreover, leaked internal Air Force memos show that some officers opposed basing at Burlington International Airport due to these environmental and political factors, arguing that a base in a less populated rural area would be preferable.

Some Vermonters have also objected to the Lightning’s potential capability to carry B-61 tactical nuclear bombs. These gravity bombs, designed primarily for hitting frontline instead of strategic targets, have a selectable yield .3 to 50 kilotons. For comparison, the Little Boy dropped over Hiroshima had a yield of 15 kilotons.

Opponents like the group “Citizens Against Nuclear Bombers in Vermont” typically cite objections to tactical nuclear weapons in principle, but also argue that hosting them could lead to Burlington becoming a target for nuclear attacks in a conflict with Russia or China.

On August 13, 2019, the Burlington City Council voted unanimously to express its opposition to deploying any aircraft capable of delivering nuclear weapons, though the resolution does not actually prevent the F-35 deployment.

However, two important caveats to bear in mind: the F-16 was already wired for delivering B-61 bombs; and that the F-35 is not yet capable of carrying B-61 bombs until they are upgraded to the Block 4 model.

Senators Sanders and Leahy claim they would withdraw their support if they learned of plans for nuclear weapons facilities.

On the one hand, not all F-35 units will be assigned a nuclear mission. On the other hand, the Air Force has a policy not to report which units are and which aren’t trained and equipped for nuclear weapons delivery.

Practically speaking, the Pentagon would likely be reluctant to build the secure facilities for storing nuclear weapons at Burlington International Airport, a project which might prove difficult to keep under wraps. However, critics argue the F-35s would be targeted, whether nuclear bombs were located there or not.

Politics, Economics and the F-35

More broadly, some protesters point to the F-35’s notorious cost overruns and delays and argue that Sanders’s support for the jet’s deployment is contrary to his proclaimed intent to reign in “out of control military spending” if elected president.

Senator Leahy’s support may be in part due to his prominence on the Senate’s National Guard caucus. Sanders has characterized his support for the F-35 as being primarily due to its economic benefits to Vermont rather than its value for national security per se.

In a 2014 town hall, Sanders stated: “In the real world, if the plane is built … and if the choice is if that goes to Vermont … South Carolina or Florida, what is your choice as a United States Senator? Do you want it to go to South Carolina? ... My view is that given the reality of the damn plane, I’d rather it come to Vermont than to South Carolina. And that’s what the Vermont National Guard wants, and that means hundreds of jobs in my city. That’s it.”

The Pentagon plans to procure over 2,400 F-35s for service in the Air Force, Navy and Marines, meaning many more communities will host the stealth jets. Protests against F-35-related noise have also occurred in place as distant from Vermont as Boise, Idaho and Tucson, Arizona.

While both housing and employment opportunities in communities adjacent to F-35 bases will be most directly impacted, deployments of the controversial jet may also increasingly serve as a symbolic battleground on which opposing political values regarding the appropriate size and role of the U.S. military are hashed out.

Sébastien Roblin writes on the technical, historical and political aspects of international security and conflict for publications including the The National Interest, NBC News, Forbes.com and War is Boring. He holds a Master’s degree from Georgetown University and served with the Peace Corps in China. You can follow his articles on Twitter. This piece was first featured in September 2019 and is being republished due to reader's interest.