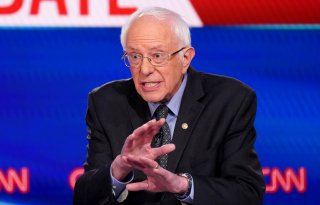 As people spend their days at home, quarantining themselves from the coronavirus, they might be in disbelief to remember that this is the same month that saw Pete Buttigieg and Amy Klobuchar exit the Democratic presidential primary. It might be harder for them to believe that the primary remains ongoing, with Senator Bernie Sanders of Vermont refusing to concede the race to former Vice President Joe Biden, who possesses a 300-delegate lead.

Despite continuing to emphasize his pledge to support the eventual Democratic nominee in the general election, Sanders has said he wants another one-on-one debate with Biden in April. The candidates’ last debate took place on March 15 in Washington D.C., with no live audience, out of concern for social distancing and the coronavirus. “My focus is just dealing with this crisis right now,” Biden said, referring to the virus. “I haven’t thought about any more debates. I think we’ve had enough debates. I think we should get on with this."

Sanders is also continuing heavy investment in digital advertising for the New York primary, which was originally meant to be held on April 28 but has been rescheduled for June 23. That would indicate that the senator intends to remain in the race until the start of the Democratic convention in July.

"We don't know what will befall us. I mean, who knew two months ago that we'd be where we are with the virus,” said James Zogby, a close advisor on Sanders’ 2016 campaign and who is now on the board of “Our Revolution, the progressive 501c4 that is an outgrowth of that effort. “Who knows where we'll be two months from now? Who knows what Bernie does, what Biden does, what else happens that will change the dynamics, so it would be irresponsible to leave the race, as some have suggested."

All four primaries that were scheduled to take place on April 4, Alaska, Wyoming, Hawaii, and Louisiana, have been rescheduled due to the coronavirus. The only remaining primary scheduled for the month of April is Wisconsin on the seventh. All other contests have been pushed back, mostly to June.

"Bernie Sanders is still a candidate for the Democratic nomination," said Jeff Weaver, senior advisor to the Sanders campaign, last Tuesday. "One of the things that means is working to secure votes in future contests."

While Biden is currently the frontrunner, having landslided several of the March primaries (FiveThirtyEight gives him a 99% chance of winning the nomination), he is not yet the presumptive nominee. That would take 1,991 delegates, 750 more than he currently possesses. Sanders remains 1,050 delegates away.

While the public health crisis has caused this to become a ghost primary, some Democratic strategists still worry prolonging it will weaken the Democratic nominee come November.