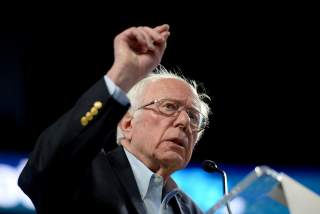 Last evening Senator Bernie Sanders of Vermont, the frontrunner for the Democratic presidential nomination, announced a new childcare plan he would enact if elected president in November. Speaking with Anderson Cooper on CBS’ 60 Minutes, Sanders described why he felt a universal, federally financed childcare plan was necessary and how he would attempt to pay for such a far-reaching proposal.

This is an addition to Sander’s current platform of Medicare for All (which would provide publicly funded healthcare to all residents of the United States), the Green New Deal, free admission to public colleges, and the cancellation of all student debt.

“Childcare must be guaranteed for every child regardless of their parents’ income, just like K-12 education,” Sanders said in a statement after the interview. “We know that the first four years of a child’s life are the most important years of human development, so it is unconscionable that in the wealthiest country in the world, we do not properly invest in early childhood education.”

Sander’s plan has two parts, focusing on care before the age of three and after.

From infancy to age three, Sander’s plan would guarantee childcare at least ten hours a day every single day of the week. The program would function at different hours of the day to accommodate all parent work schedules. Under Sander’s vision, the workforce would be unionized and mandated child-to-adult ratios and group sizes.

After the age of three, Americans would be provided with full-day, every-day childcare locally administered but funded by the federal government. Special resources would be reserved for special needs children.

This comes more than a year after Sander’s primary competitor, Senator Elizabeth Warren of Massachusetts, presented her own plan for a nationally-funded childcare system.

Both senators say their plans would be funded through a wealth tax. Warren’s proposal would take 2% (what she often refers to as “two cents”) of a person’s wealth if they are valued at more than $50. This amount would increase to 3% on individuals worth $1.1 billion or more.

Sander’s wealth tax is more strident. His would involve taking 1% of what a person owns if it’s more than $32 million. And for amounts over $10.1 billion, the tax accumulates to 8% of a person’s total wealth.