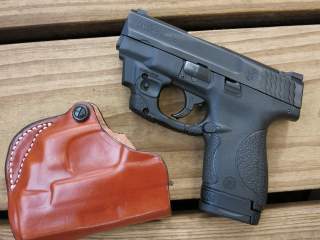 In the crowded field of compact semi-automatic handguns, the M&P 2.0 Compact appears as close to the ideal as possible. A concealable handgun with a sixteen round capacity and absolute reliability, Smith & Wesson’s new pistol improves on an already solid platform.

The most critical feature of any firearm, particularly those carried on a daily basis, is reliability. A daily carry gun is more likely to be used in an emergency than others, and once drawn it must work, flawlessly, every time. The Smith & Wesson M&P 2.0 Compact has recently set a new standard for reliability, with one gun recently firing two thousand rounds without a single mishap.

The rise of Glock and other high capacity nine-millimeter polymer frame handguns in the 1980s and 1990s caught the famous Smith & Wesson company off guard. The company, well known for revolvers but less so for pistols, was caught off guard. The company’s first handgun, the Sigma, debuted in 1994 but failed to achieve the same level of popularity as other “Wonder Nines” of the period.

The Smith & Wesson M&P series is the company’s second generation polymer frame pistol and has enjoyed considerably more success than the company’s earlier offering, which was rebadged the SD. Designed for “Military and Police,” the M&P is also available on the civilian market and available in full size, compact, and subcompact sizes, in calibers from the diminutive .22 LR to the powerful .45 ACP. One firearms and ammunition blog rhetorically asks if the M&P Compact is “the best carry pistol ever,” stating that it has the best qualities of a carry fighting pistol: “reliable operation, effective caliber, manageable recoil, and decent ammo capacity.”

The M&P 2.0, introduced in 2017, is the M&P’s first major revision. The M&P is a striker fired pistol, which uses a striker rod instead of traditional hammer and firing pin to discharge the weapon. Chambering a round by racking the slide half cocks the pistol, while pulling the trigger cocks it the rest of the way and then releases the striker, firing the pistol. This means that even after the slide is cocked a striker-fired gun cannot fire accidentally without the trigger being pulled, a measure that advocates say increases overall safety. Advocates claim this translates into a safer pistol for carrying with a round in the chamber—and one that can be brought into action quicker than other handguns.

The M&P 2.0 Compact is in the same general class as the extremely well regarded Glock 19 nine millimeter compact. The nine millimeter version has an internal magazine capacity of fifteen rounds plus one in the chamber, for a total of sixteen rounds. The barrel is 3.6 inches long with a one in ten-inch-twist rate, which will stabilize heavier nine millimeter rounds better than the previous 1 in 18.75 inch twist.

Unlike the Glock, the M&P 2.0 Compact has a stainless steel chassis lining the Zytel frame to prevent flex during firing. The pistol’s frame and external metal parts are covered in the company’s proprietary Armorite corrosion-resistant finish, which gives it a subdued, off-black look. A thumb safety adds a further layer of protection from negligent discharges.

Smith & Wesson’s compact nine is also designed to be more comfortable to shoot, allowing the shooter to concentrate on accuracy. The 2.0 Compact has an 18-degree grip angle for natural point of aim, and a low barrel bore axis reduces barrel climb due to recoil and helps ensure more accurate follow-up shots. The pistol has aggressive texturing throughout the grip and four different palmswell inserts for custom fitting to the owner’s particular hands.

Above all, the M&P 2.0 Compact is utterly reliable. In a long-running test, American Rifleman put 2,016 rounds of ammunition, primarily 124 grain Sig Sauer ball ammunition through the pistol without a single malfunction. The pistol was cleaned twice, once prior to testing and once at the one-thousand-round mark, but was otherwise left alone. The importance of this level of reliability to concealed and daily carry users cannot be overstated.

In the crowded field of compact semi-automatic handguns, the M&P 2.0 Compact appears as close to the ideal as possible. A concealable handgun with a sixteen round capacity and absolute reliability, Smith & Wesson’s new pistol improves on an already solid platform.