Better Than Nothing? The Royal Navy Will Buy Two Littoral Strike Ships 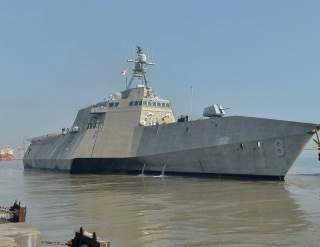 Key point: London does not have much money for advanced warships and keeps cutting it Navy. Buying two LSS will not do much but is what the British are willing to pay for.

The U.S. Navy has begun acquiring similar vessels. The Americans call them “afloat forward-staging bases.” They’re a key component of expeditionary sea bases, collections of ships, landing craft and causeways that allow a naval flotilla to land and support a ground force.

Gavin Williamson, the U.K. defense secretary at the time, in February 2019 announced the planned purchase of two littoral strike ships. The Royal Navy in August 2019 released concept art confirming the basic layout of the vessels.

“These globally deployable, multi-role vessels would be able to conduct a wide range of operations, from crisis-support to war-fighting,” Williamson said.

They would support our Future Commando Force. Our world-renowned Royal Marines – they’ll be forward deployed, at exceptionally high readiness and able to respond at a moment’s notice bringing the fight from sea to land.

Our vision is for these ships to form part of two littoral strike groups complete with escorts, support vessels and helicopters. One would be based East of Suez in the Indo-Pacific and one based West of Suez in the Mediterranean, Atlantic and Baltic.

And, if we ever need them to, our two littoral strike ships, our two aircraft carriers, our two amphibious assault ships Albion and Bulwark and our three Bay-class landing ships can come together in one amphibious task force. This will give us sovereign, lethal, amphibious force. This will be one of the largest and best such forces anywhere in the world.

The littoral strike ships could partially reverse years of cuts to the U.K. amphibious fleet. London in 2011 sold one of its four Bay-class landing ships. In 2018 the Royal Navy decommissioned, years early, the assault ship Ocean.

Being modified merchant vessels, the littoral strike ships likely will lack robustness compared to purpose-built warships. But the British, like the Americans before them, concluded that these ships are better than nothing.

The sea-base ships can do more than just land and support ground troops.

“One could easily envision this ship serving as a repair ship, a hospital ship, an aviation depot-support ship, or a dedicated [Littoral Combat Ship] mothership in the future — given the appropriate mission capability package was developed and fitted,” Adm. Mark Buzby, head of U.S. Military Sealift Command, told Breaking Defense in 2013. “It’s 800 feet of ‘use your imagination.”

The Royal Navy clearly is eager to use its imagination, too.

The sea-base ships suffer limitations, of course. They can embark and launch aircraft, but lack the repair and support facilities for intensive flight operations. They’re slow and lack heavy armor and self-defense missiles.

But that doesn’t mean they can’t, or won’t, fight. It’s worth noting that the Royal Navy during the 1982 Falklands War outfitted cargo ships with flight decks to carry Harrier jump jets.