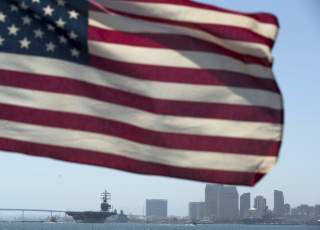 Note to China and Russia: despite appearances, the time of coronavirus may not be an opportune time for you to chisel away at America’s global standing. Yes, U.S. federal, state, and local leaders are consumed with battling a pandemic at home. Conceivably the political leadership might hunker down in foreign policy, abjuring power politics while it looks inward. But the opposite might happen. Washington might maintain its usual strategic posture while implementing workarounds to stem contagion among the diplomatic apparatus and deployed forces.

The leadership might even assert itself with greater vigor than usual, egged on by an ornery streak in American culture.

Admittedly, this defies strategic logic. If some disaster lands a heavy blow against your national economy or military might, it seems natural to husband what’s left. By that logic the leaderships of stricken nations should take a cautious line in international politics. They should refrain from new ventures, wind down old ones, and conserve finite resources until the domestic situation is put to rights. And a survey of history shows that some powers indeed comport themselves by cost/benefit logic in times of turmoil at home. But a sizable fraction do not. Because of its distinct history and culture, the United States falls into the latter fraction.

It is a country with a penchant for surprising antagonists.

So, Beijing and Moscow, beware of extrapolating future U.S. actions from the internal woes now afflicting the republic. In all likelihood the leadership will do its utmost to preserve a vibrant forward military presence, keeping soldiers, sailors, and aviators on station and ready for action at potential hotspots. Washington will refuse to forfeit vital interests in the Western Pacific and elsewhere around the Eurasian periphery. In other words, the strategic impact of humanitarian disasters like pandemics is less direct or straightforward than it might seem.

Here’s a hypothesis I’ve been toying around with for the past decade and have halfway talked myself into believing. Namely that demographic stress makes a society more like itself. In other words, it reinforces the society’s basic character. When trouble strikes, the society’s members reach for familiar ways of thinking, feeling, and acting. They respond in ways tested in, and seemingly verified by, past experience. Stress drives discourses about diplomacy and strategy toward extreme versions of these familiar ways, and action follows that trend. Authoritarian regimes become more authoritarian, liberal regimes more liberal and thus less predictable. Or at least that’s the finding I took away from studying population decline in classical antiquity.

Shift the scene, if you will, to the Mediterranean Sea during the fifth century B.C. That was a warlike age. Great powers like Athens, Sparta, and Persia wrangled ceaselessly for mastery of the Aegean world. But it was in 464 B.C., a time of relative peace, that the city-state of Sparta suffered a catastrophic earthquake. The disaster struck at the fundaments of Spartan society. The quake leveled the city except for five houses. More importantly for the regime’s longevity, a gymnasium collapsed, slaying the flower of Spartan military manpower. Among the fallen were a major proportion of elite Spartiate infantrymen around whom the army—Greece’s most vaunted—was built.

The Spartan army wasn’t just the long arm of foreign policy. It was the force that preserved order at home. Spartan society depended on masses of helots, or slave laborers, to work the land and produce goods the city needed to subsist. Slaves vastly outnumbered the native populace. Losing the army, consequently, would spell dire peril for Sparta’s military oligarchy. And indeed, the helots promptly revolted in the earthquake’s aftermath, while the regime remained in disarray. Only with outside help did the army put down the rebellion—help that came, ironically, from rival and future foe Athens.

The casualties from the cataclysm compounded shortsighted policies that were already slowly sapping the city-state’s manpower. Spartans didn’t enact an early version of China’s one-child policy. Not precisely. They did practice a crude form of eugenics, casting aside infants deemed unfit. They were also slow to liberalize military recruitment, widening the manpower pool to help replenish fallen warriors. The foreseeable result: a dwindling core of Spartan infantry prowess.

So the fifth century saw nature strike an authoritarian society a colossal but brief demographic blow in peacetime, leaving its inhabitants to pick up the wreckage. Afterward the Spartan leadership conducted itself cautiously and conservatively, as strategic logic dictates. It fit the pattern. At the same time the city’s rulers were culpable for self-defeating behavior, failing to amend laws and policies to sustain their society into the future. Authoritarians became more authoritarian—to their own ultimate detriment.

In stark contrast, democratic Athens defied the pattern. Athenians became more venturesome in the wake of natural disaster. Plague infected the city-state during the early stages of the Peloponnesian War, which raged from 431-404 B.C. The Athenian pestilence foreshadowed the pandemic currently sweeping the world. Unlike the Spartan earthquake, it came in wartime. Unlike the earthquake, it came not as a swift blow but as lingering death. Disease claimed the lives of up to one-third of city residents.

The chronicler Thucydides captures how illness struck at the roots of Athenian society. Corpses lay unburied because no one wanted to contract sickness from the fallen. The suspension of funeral rites affronted the sensibilities of a pious populace. There was more to the plague than religion, though. Some Athenians gave vent to their worst impulses. They squandered fortunes on riotous living because there might be no tomorrow. Lawlessness prevailed because no one was enforcing the law and everyone knew it. Civilization wilted.

And in foreign policy? Some favored turning inward. Many blamed “first citizen” Pericles for the city’s wretched state, and yet the faction that favored peace with Sparta lost out in the democratic assembly. A younger, more reckless generation came to dominate foreign policy. Ambitious youth launched Athens into new martial enterprises despite mass death at home. Some of these ventures succeeded. Others ended in catastrophe, most notably an invasion of Sicily in 415 B.C. that cost the city its entire expeditionary army and fleet.

Now, the United States is no Athens. There are varieties of democratic rule. In fact, the American founders steeped themselves the classics and fashioned a mixed republican regime precisely to avoid the pitfalls of Athenian-style direct democracy. They implanted institutional checks and balances in the system to encourage forethought and restrain ambition and whimsy reminiscent of Athens. The founders’ design mostly works. It’s doubtful an America ravaged by coronavirus will hurl itself into military misadventures comparable to the Sicilian expedition. It’s equally doubtful it will retreat into isolationism, surrendering its global position while fighting disease. It will resist if attacked.

Like ancient Sparta and Athens, in short, the United States has a fundamental character that’s unlikely to change much because of demographic travails. If my hypothesis is right, it will become more like itself during the current crisis. What that means, however, is hard to puzzle out. More like what? The United States is an especially difficult strategic actor to evaluate. Athens was a compact maritime city-state with a homogenous populace. The United States is a polyglot hybrid land/sea power that sprawls across a continent. Countless regions, economic interests, ethnic and religious groups, and other segments comprise the American polity.

How to forecast the conduct of such a strategic actor?

Diplomatic historians have sought to trace the roots of U.S. foreign-policy behavior. Two masterworks stand out in the genre. One of the first books I ever reviewed came from University of Pennsylvania professor Walter McDougall. Titled Promised Land, Crusader State, it portrays U.S. history as unfolding in two phases. For the first century after its founding, the United States styled itself a promised land, an example unto all mankind. Its foreign policy underwent several phases during that century, but non-entanglement in great-power alliances and wars was a constant.

Contends Professor McDougall, the Spanish-American War of 1898 wrought a revolution in U.S. diplomacy. During the splendid little war the U.S. Navy, Marine Corps, and Army wrested a modest island empire from Spain, enmeshing the United States in Caribbean and East Asian affairs. Non-entanglement was no longer a serious option. As they entered the twentieth century, Americans increasingly sought to shape the regional and global order to make the world safe for American democracy. Hence McDougall’s crusader state metaphor.

Bard College professor Walter Russell Mead takes an approach to U.S. diplomatic history reminiscent of McDougall’s but with a twist. In his treatise Special Providence, Professor Mead espies several schools of foreign-policy thought, each traceable to one of the founders. Jeffersonian democracy, Hamiltonian big government, and other strains make up a composite political culture.

Here’s the twist. Mead postulates that America has a kind of recombinant political and strategic culture. Stimuli of various types can bring one school of thought to dominance while subordinating others. Not long before 9/11, for instance, he posited that external attacks set loose the “Jacksonian tradition” within American society. Associated with firebrand president Andrew “Old Hickory” Jackson, the hero of the 1815 Battle of New Orleans, affiliates of the Jacksonian tradition prefer for the United States to mind its own business in world affairs. Assault America, though, and you’d well advised to duck.