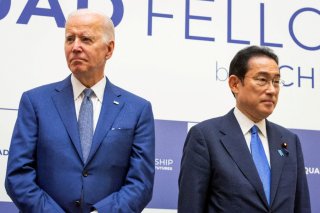 On May 13, 2022, President Joe Biden hosted a summit in Washington with nine representatives from the Association of Southeast Asian Nations (ASEAN). Then, on May 19, he was off on his first trip to Asia visiting South Korea and Japan, where he launched the Indo-Pacific Economic Framework (IPEF) and participated in a Tokyo summit with the leaders of the “Quad,” or Quadrilateral Security Dialogue, a grouping that includes Australia, Japan, India, and the United States.

Biden’s recent embrace of Asia is in stark contrast to how the United States pulled out of the Trans-Pacific Partnership (TPP) grouping in 2017 that is now led by Japan. China and another fourteen Asian countries recently signed their own Regional Comprehensive Economic Partnership (RCEP). Heads are spinning across the Asia-Pacific region.

After all, the objectives of the IPEF seem underwhelming: cooperation on digital trade, the resiliency of supply chains, clean energy, and anti-money-laundering measures. Furthermore, member countries can choose which of these areas they participate in, which can only lead to confusion.

Does America need a new economic grouping in Asia? Far better than adding a layer to the alphabet soup of organizations in the region is to bring more focus and follow through to the task of increasing American economic, financial, and national security.

Southeast Asia—south of China and east of India—is an expansive, high growth, and strategically important region of ten countries and 650 million optimistic, youthful, tech-savvy consumers. It offers a wealth of entrepreneurial talent and an abundance of commercial opportunities, and explains why a wave of capital from America, China, Europe, Japan, India, and South Korea is chasing significant opportunities in the region. Over the past few years, Southeast Asia has attracted more annual foreign direct investment than China. And China has become the largest direct investor in Southeast Asia as well as its largest trading partner, surpassing the European Union.

In this age of U.S.-China rivalry, Southeast Asia will be a key part of the chessboard. More than 8,000 miles from Washington, it is an away game for America and a home game for China. China also has an edge due to the influence of ethnic Chinese based in Southeast Asia. According to the Economist’s analysis of data from Forbes magazine, ethnic Chinese controlled more than three-quarters of Southeast Asian billionaire wealth. For example, fifteen of seventeen Filipino billionaires are ethnic Chinese. This has been described as a “bamboo network” of firms with Chinese roots, united by Confucian values of diligence and thrift.

As far back as the 1960s, Japan saw these countries as key export markets while American companies couldn’t be bothered. Japanese companies are deeply familiar with these markets. Over time, this knowledge, market intelligence, and deep relationships pay off in sales, profits, and influence. Even now, Japan exports more to Southeast Asia than America even though America’s economy is four times larger than Japan.

America should focus its current efforts on the Philippines and Indonesia by balancing both mutual economic and security interests. The Philippines is an anchor ally in Southeast Asia only 300 miles from Taiwan while Guam is 1,700 miles from Taiwan. Indonesia is also a vital American partner in the Indo-Pacific region as Indonesia is the world’s third-largest democracy, largest Muslim-majority country, and will be the host of the G20 summit of the largest twenty economies in the world in November.

Indonesia and the Philippines have a combined population approaching 400 million, are both strategically located along key trade routes and the contested South China Sea, and both are sources of strategic, critical metals dominated by China.

There are more than four million U.S. citizens of Philippine ancestry in the United States and more than 350,000 U.S. citizens in the Philippines. The U.S.-Philippines alliance has been under strain since America left the Subic and Clark bases in the early 1990s and especially since 2016, with the election of President Rodrigo Duterte. We now have a chance for a fresh start as Ferdinand “Bongbong” Marcos, Jr., son of the former dictator Ferdinand Marcos Sr., will become the country’s seventeenth president in June.

Indonesia is a leader in ASEAN, representing about half of the groupings’ annual economic output plus over $5 trillion in cargo and more than 50 percent of the world’s oil tanker traffic, which passes through the Indian Ocean and the Straits of Malacca into the South China Sea. The challenge is that China is Indonesia’s largest trading partner and Chinese investment in Indonesia is soaring. Still, tensions are escalating between China and Indonesia due to a new Chinese law that for the first time allows its coastguard to fire on foreign vessels and demolish structures built in disputed waters.

Rather than another broad Asia-wide agreement, America and the Biden administration need to focus attention and resources on the Philippines and Indonesia in Southeast Asia to complement its key North Asian allies Japan and South Korea.

Carl Delfeld is a senior fellow at the Hay Seward Center for Economic Security, former U.S. board member of the Asian Development Bank, the publisher of the Independent Republican, and the author of a new book, Power Rivals: America and China’s Superpower Struggle.