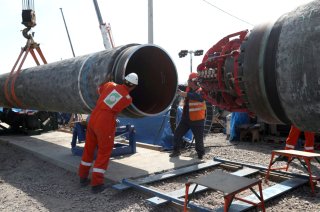 U.S. diplomats have opened negotiations with major gas exporters around the world to supply European nations in the event of an energy cutoff from Russia.

White House officials indicated on Tuesday that they were confident Europe would have a reliable supply of natural gas, even if the continent’s supply of energy from Russia was abruptly severed.

“To ensure Europe is able to make it through the winter … we expect to be prepared to ensure alternative supplies covering a significant majority of the potential shortfall,” an official said, according to the Guardian.

America’s quiet diplomatic campaign to secure gas supplies appears to be an attempt to blunt a major economic weapon of the Kremlin: its ability to cut gas exports to Europe, which buys most of its winter heating fuel from Russia.

While the administration is believed to be focused on reaching an agreement with Qatar, the world’s largest supplier of natural gas, Biden administration officials claimed that they are working to secure gas supplies from multiple nations. “The conversation is really broad, with a lot of companies and countries around the world,” one official said. “It’s not centered on one or two suppliers … by doing that you don’t need to ask any one individual company or country to surge exports by significant volumes, but rather smaller volumes from a multitude of sources.”

The issue of gas heating has been a source of disagreement as European nations work to prepare for a potential Russian invasion of Ukraine. There are now more than 100,000 Russian troops near the Ukrainian border, leading to concerns that Russia intends to invade. Russian troops recently entered Belarus, which borders Ukraine to its north, for a series of joint military exercises that some officials have speculated could serve as cover to prepare for an invasion from multiple directions.

In remarks to the House of Commons, British prime minister Boris Johnson suggested that Germany—a major importer of Russian gas and the end destination of the controversial Nord Stream 2 pipeline—was hesitant to impose sanctions against Russia. Germany has largely remained in alignment with other European countries over the Ukraine issue, but it has urged caution and restraint for all involved parties.

Diplomacy has continued between Russia, the United States, and NATO. Early talks to end the crisis in Geneva failed to lead to an agreement, but further talks have reportedly made incremental progress. As part of these negotiations, Russian deputy chief of staff Dmitry Kozak reportedly visited Paris on Tuesday for additional meetings with French, German, and Ukrainian officials.