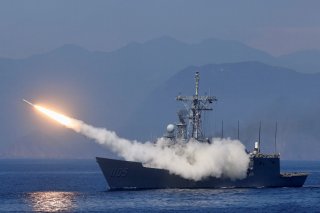 Following House Speaker Nancy Pelosi’s visit to Taiwan earlier this month, the White House is making a push for arms sales to Taipei.

According to Politico, President Joe Biden will ask Congress for a $1.1 billion arms sale to Taiwan, including “60 anti-ship missiles and 100 air-to-air missiles.”

The weapons are meant to deter China, which has been running military drills near Taiwan ever since the Pelosi visit. This week, U.S. warships passed through the Taiwan Strait. The Washington Post reported on August 20 that Chinese president Xi Jinping had asked President Biden to prevent Speaker Pelosi from going to Taiwan.

The Politico story about the arms shipment also broke down how the weapons are distributed.

The sale is “likely” to be approved by Congress, including the leaders of the two parties on the Senate and House Foreign Affairs Committees, although the timing for doing so is not clear.

The aid, if it passes, will follow the latest $3 billion in security assistance to Ukraine, which took place on Ukraine Independence Day and was authorized by the Ukraine Security Assistance Initiative (USAI). Of course, Ukraine is currently part of an active conflict while Taiwan is not.

“This USAI package, which is being announced on Ukraine Independence Day, underscores the U.S. commitment to supporting Ukraine over the long term – representing a multi-year investment to build the enduring strength of Ukraine’s Armed Forces as it continues to defend its sovereignty in the face of Russian aggression,” Air Force Brig. Gen. Pat Ryder announced on August 24. “Unlike Presidential Drawdown (PDA), which DoD has continued to leverage to deliver equipment to Ukraine from DoD stocks at a historic pace, USAI is an authority under which the United States procures capabilities from industry.”

Voice of America reported this week that the head of Taiwan’s China policymaking Mainland Affairs Council (MAC,) Chiu Tai-sa, will visit the United States next month. Chiu is set to visit the Brookings Institution and the  Center for a New American Security (CNAS).

“We don't have any meetings to announce and would refer you to TECRO for information on possible Taiwan official travel to the United States,” State Department deputy spokesperson Vedant Patel told the outlet.