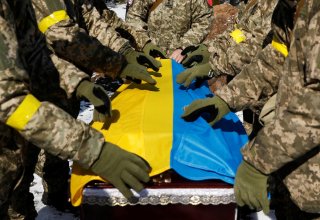 President Joe Biden described the alleged atrocities committed by Russian troops in Bucha, Ukraine, as a “war crime” and called for a war crimes trial against Russian president Vladimir Putin.

"You may remember I was criticized for calling Putin a war criminal," Biden said to reporters. "Well, the truth of the matter, you saw what happened in Bucha. This warrants him—he is a war criminal,” he added. "This guy [Putin] is brutal, and what’s happening in Bucha is outrageous, and everyone's seen it.” Biden added that Washington will continue to gather evidence to support war crimes charges against the Russian president, noting that more U.S. sanctions against Russia are on the way. Biden did not, however, agree with Ukrainian president Volodymyr Zelensky’s characterization of Russia’s actions as a “genocide,” instead arguing that they constitute a war crime.

Biden’s comments come shortly on the heels of accusations, first leveled by Ukrainian authorities, that Russian forces committed atrocities in the town of Bucha. Local officials said the city was strewn with the lifeless bodies of civilians, some of them with their hands tied behind their backs, in the wake of a recent Russian withdrawal. "Corpses of executed people still line the Yabluska street in Bucha. Their hands are tied behind their backs with white 'civilian' rags; they were shot in the back of their heads. So you can imagine what kind of lawlessness they perpetrated here," Anatoliy Fedoruk, Bucha’s mayor, told Reuters on Saturday. Officials allegedly discovered several mass graves outside the city where civilians who posed no military threat to the invading Russian forces were buried.

Moscow has stridently denied the accusations, claiming that they are a “provocation” organized by the west. "I would like to emphasize with full responsibility that not a single civilian suffered from violence when the town was controlled by the Russian Armed Forces. On the contrary, our troops delivered 452 tonnes of humanitarian aid for civilians,” said Russia’s ambassador to the United States, Anatoly Antonov. The Russian ambassador accused Ukraine’s Armed Forces of shelling the Ukrainian town immediately after the Russian withdrawal. “This is what could have caused civilian casualties. That said, the Kyiv regime is clearly trying to blame its atrocities on Russia," Antonov claimed.

Russian Foreign Ministry spokeswoman Maria Zakharova called for a special session of the UN Security Council over the Bucha incident. "Yesterday, the current UN SC president, Britain, acting in accordance with its worst traditions, once again refused to give consent to holding a Security Council meeting on Bucha. Today, Russia will demand once again the UN Security Council meet in session to discuss criminal provocations by the Ukrainian military and radicals in that city," she wrote on her Telegram channel, according to Russian state-backed news outlet TASS.

A senior U.S. defense official said on Monday that the United States could not independently confirm Ukrainian accounts regarding atrocities committed in Bucha. "We're seeing the same imagery that you are. We have no reason whatsoever to refute the Ukrainian claims about these atrocities—clearly, deeply, deeply troubling," the official said. "The Pentagon can't independently and single-handedly confirm that, but we're also not in any position to refute those claims."