Biden Has No Better Friend Than Boris Johnson’s Great Britain 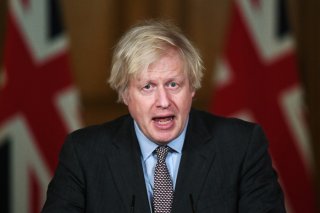 On December 31, 2020, Great Britain finally withdrew from the European Union (EU). Kinder critics of this decision—a victory for Prime Minister Boris Johnson—describe it as a strategic error that will cause significant disruption for years to come. More vociferous opponents allege that the United Kingdom has come under the influence of a “populist” demagogue—“Britain Trump”—that it has “lost itself,” “gone nuts,” and that it will begin to withdraw from the world as economic stagnation and internal dislocation take their toll. Some, noting the apparent surge in Scottish separatism, even question whether the country will still exist in ten years; after all, Scots and Northern Irish voted to remain inside the EU, whereas their English and Welsh compatriots voted to leave.

But is Boris Johnson really “Britain Trump?” And is the UK really turning inward? Events over the past year would suggest otherwise, even if the thorny issue of Scottish separation remains in the British union’s side. In fact, Britain could be experiencing a once-in-a-lifetime geostrategic realignment that could have lasting implications for the country’s future and its relations with key allies, including the United States.

Just over five years ago, in 2015, the British picture looked somewhat different. David Cameron, then prime minister, had just sipped beer in a pub with Xi Jinping, China’s paramount leader, while George Osborne, then chancellor of the Exchequer, looked to a “golden decade” of closer UK-China ties. The UK was acting increasingly as a “background power,” placing undue emphasis on often-imaginary “soft power.” Speculation swirled over the sustainability of the government’s defense plans. And critics were still questioning Britain’s willingness to intervene in overseas crises insofar as Parliament had voted against joining President Barack Obama’s plan in 2013 to chastise the Assad regime for using chemical weapons against Syrian civilians.

Today, the situation has changed. Since early 2020, Britain has initiated several bold changes to the direction and administration of its global posture. One of these occurred in June when Johnson announced a shake-up of the country’s foreign policy machinery by merging the Department of International Development with the Foreign and Commonwealth Office. Critics alleged that this would reduce Britain’s so-called “aid superpower” status; 100 aid agencies even published an open letter to denounce the move, stating that “we [Britain] are turning our backs on the world’s poorest people.” Not so. Instead, the decision, as the prime minister rightly observed, was designed to mobilize “every one of our national assets, including our aid budget and expertise, to safeguard British interests and values overseas.” If followed through carefully, the move could lead to greater integration between UK foreign and aid policy.

In terms of defense spending, Johnson’s government has answered repetitive calls from American presidents—from Barack Obama to Donald Trump—to increase military expenditures. Today’s British government recognizes that defense spending, not words, is the real cement of alliances and partnerships. With this uplift, the UK has signaled that it will do more to underwrite its allies’ security, not least in NATO, but also in other regions. Consequently, the prime minister announced a £16.5 billion increase in military spending on top of the planned growth of 0.5 percent above inflation per year over the course of the current parliament (due to end in 2024). Therefore, Britain will spend £24.1 billion on modernizing its military forces over the next four years; much of it will enhance cyber capabilities, procure more lethal weapons, and empower the Royal Navy.

Likewise, it is Johnson’s government that has moved closer to the U.S. position on China. After many years of dithering and indecision on China, the British government has started to revise its approach and counter Beijing’s revisionist agenda. London has stood up for Hong Kongers by criticizing Xi Jinping’s demolition of the Sino-British Treaty of 1984 and offering British nationals resident in Hong Kong the right to settle permanently in the British Isles. Last year, Jonhson also moved to block Huawei from gaining further access to Britain’s telecommunications system, ordering British companies to cease the installation of new equipment by September 2021. And Britain has begun to “tilt” more towards the Indo-Pacific: the Royal Navy will deploy HMS Queen Elizabeth—Britain’s giant new aircraft carrier—to the Pacific later this year, alongside a full strike group, to which America and other allies will assign assets.

But that’s not all. The British government has also moved to breathe fresh life into international cooperation, particularly where it serves free and open nations’ interests. London has renewed its support for the “Five Eyes” grouping, just as it has, as chair of the G7 in 2021, invited India, South Korea, and Australia to the annual summit. This new group has already been described as the “D-10”—the world’s ten leading democracies. Simultaneously, Johnson’s government has moved forward with a robust new environmental plan—a so-called “green industrial revolution”—as it looks to host the COP26 Summit in Glasgow later this year.

What, then, does all this add up to? Does this look like an “inward turn?” Hardly. “Little Britain” was always the figment of overactive imaginations, often fanned on by Britons unhappy about their country’s withdrawal from the EU. Is it about “imperial nostalgia?” Absolutely not. As George Orwell noted in England Your England, the British people were never particularly interested in empire (even if they amassed a large one). Rather than reliving past glories, the UK government’s recent moves are instead a response to a more volatile and competitive era. And can Britain’s new approach—a more global outlook, increased defense spending, a renewed democratic multilateralism, and a green agenda—really be described as “populist?” Of course not. It is a set of sensible, if transformational, moves to erect the skeleton of “Global Britain,” the term used by the British government to define the country’s global engagement in the post-Brexit era.

Despite challenging conditions brought about by coronavirus, Boris Johnson—aided by good advisors—is turbo-charging Britain’s global role. And more is to come: the government is due to publish its Integrated Strategic Review next month. This is likely to add the flesh to “Global Britain” by reviving the UK’s natural role as a maritime power, ready to uphold a multilateral architecture that serves free and open nations and an environmental agenda that leads the entire world. In these efforts, the United States has no better partner: no other ally can match the ambition, the range, and the reach of the capabilities the UK has to offer. As President Biden prepares to compete with revisionist China and push for a lasting solution to the environmental crisis, he has no better ally. How could he not embrace Boris and work with Britain?

James Rogers is Co-founder of the Council on Geostrategy, a new British think tank based in Westminster, London. Previously, he held positions at the Henry Jackson Society, the Baltic Defence College, and the European Union Institute for Security Studies. He has given oral evidence before the Foreign Affairs, Defence, and International Development committees in the Houses of Parliament.