Biden Lashes out at Reporter for Asking About Son's Lovechild 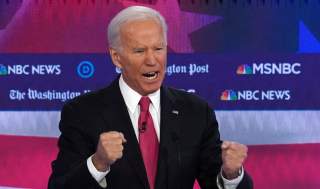 Former Vice President Joe Biden on Thursday ripped into a reporter who asked for comment on the news that his son Hunter Biden fathered an out-of-wedlock child with a woman in Arkansas.

A DNA test found that Hunter, 49, is the father of Lunden Alexis Roberts’s child, according to a motion filed Wednesday in Arkansas. The 28-year-old filed a petition for a paternity test and support for her 1-year-old back in May, the Daily Mail previously reported. Hunter denied the allegations in August and asked the court to dismiss all petitions.

“Do you have a comment on this report and court filing out of Arkansas that your son Hunter just made you a grandfather?” Doocy can be heard saying off camera.

“No, that’s a private matter, I have no comment. But only you would ask that. You’re a good man, you’re a good man. Classy,” Joe Biden responded, smiling.

Biden gets angry at a reporter for doing his job:

Reporter: “Do you have a comment on this report and court filing out of Arkansas that your son Hunter just made you a grandfather?”

Biden: “No, that’s a private matter, I have no comment. But only you would ask that. … Classy” pic.twitter.com/vxPzE8St8Q

The paternity news broke shortly before Wednesday’s fifth Democratic debate, though the elder Biden’s new grandchild wasn’t mentioned during the debate. Hunter Biden reportedly fathered the child while dating his deceased brother’s widow, Hallie Biden. They broke up in April and Hunter Biden married Melissa Cohen in May, according to Business Insider.

Roberts said in the November court filing that the baby’s “paternal grandfather” is Joe Biden, who is considered “by some to be the person most likely to win his party’s nomination and challenge President Trump on the ballot in 2020.”