Biden Leaves the Door Open for 'High-Level Diplomacy' With Russia 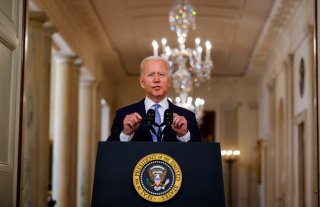 In a speech on Tuesday evening, President Joe Biden warned that the United States was “prepared no matter what happens” to address Russia’s actions in Ukraine.

“We are ready with diplomacy, to engage in diplomacy with Russia … and we are ready to respond decisively to a Russian attack on Ukraine,” Biden said, arguing that while the United States strongly preferred diplomacy to punitive economic measures, it would take them if necessary.

In recent months, hundreds of thousands of Russian troops have built up along the country’s western border with Ukraine. Around 175,000 are estimated to deploy to the border by the time the buildup is complete; Biden claimed in his remarks that around 150,000 were now in position.

The president mentioned that he had spoken with Russian leader Vladimir Putin over the weekend, adding that he praised his Russian counterpart for saying that he was in favor of continued talks rather than escalation.

“The United States has put on the table concrete ideas to establish a security environment in Europe,” the president said, citing proposals on arms control and military transparency that would apply to both NATO and Russia if implemented. He also stressed that in spite of its eastward expansion, NATO was not intentionally threatening Russia.

“To the citizens of Russia: you are not our enemy. And I do not believe you want a bloody, destructive war against Ukraine–a country and a people with whom you share such deep ties of family, history, and culture,” he added.

However, Biden implicitly criticized the view that Ukraine was historically and demographically destined to remain within the Russian sphere of influence—a view that has been expressed by leaders in the Kremlin, including Putin, in the past.

“Nations have a right to sovereignty and territorial integrity,” Biden said. “They have the freedom to set their own course and choose with whom they will associate.”

Biden underlined that if a war erupted between Russia and Ukraine, it would be viewed internationally as a war of Russian aggression and would result in extensive sanctions. He singled out the newly completed Nord Stream 2 pipeline for sanctions, claiming that it would be shut down in the event of a Russo-Ukrainian conflict, and also argued that other key areas of the Russian economy would be impacted as well.

In light of the danger of a Russian invasion, Biden repeated the State Department’s earlier request for U.S. citizens to leave Ukraine, warning that they should “leave now before it’s too late to leave safely.”