Biden Must Beef Up His Trade Policy to Compete With China 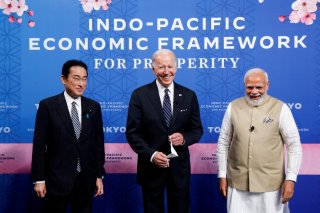 At the institutional level, China is actively working to extend its influence through bilateral and multilateral free trade agreements (FTA). Beijing has inked the ASEAN-China Free Trade Area (ACFTA) and the Regional Comprehensive Economic Partnership Agreement (RCEP). China also expressed its willingness to join the Comprehensive and Progressive Agreement for Trans-Pacific Partnership (CPTPP), a regional trade pact with higher standards than the RCEP.

Unless the United States gets busy in the FTA arena, its economic position in the region will slip badly. Indeed, if the United States stands pat while China enters more institutionalized economic agreements, Beijing may gain sufficient leverage to revise the regional economic order, using its clout to determine the rules and regulations for region-wide trade deals.

It is still not clear that China will be able to do this but certainly, it would be willing. After all, Beijing has become adept at abusing and sabotaging existing international trade and investment rules to advance its political interests. Notable examples include its imposition of economic sanctions against South Korean businesses when South Korea deployed its Terminal High Altitude Area Defense systems in 2017, its trade barriers on Australian goods, and its ban on importing several Taiwanese agricultural goods.

Why is China now so actively involved in reaching regional trade pacts? Two of its main objectives are to facilitate technology transfers and gain greater market access throughout the region. As Beijing escalates its political confrontation with the United States, China needs alternative sources to continue its technological advancement and reduce its reliance on the U.S. market. Closer economic ties with other Asian countries through FTAs will also enhance China’s role as the “indispensable man” in the regional production network, thus increasing its bargaining power over political issues vis-à-vis the United States and its allies.

The region has enjoyed peace and prosperity for nearly eight years thanks to a strong U.S. military presence and private sector economic connections in the region. However, the region’s stability and development are undermined when the Chinese government uses its economic weight to gain political advantage, as it is now doing. The region needs U.S. leadership to check China’s misbehavior and restore order. Individual countries in Asia are not able to fight alone against China. Neither Asia nor the United States can allow Beijing to sabotage the mutual benefits built upon decades of collective effort.

U.S. military ties with Asia remain solid. It keeps its bilateral security treaties with its allies in Asia. About a third of all U.S. arms exported in 2020 went to six countries in the region: Taiwan, South Korea, Japan, Australia, New Zealand, and India.

Economic ties, however, have gradually diminished as China has risen to become the world’s factory. Asian countries increasingly export their raw materials and semi-industrial goods to China for final assembly, instead of directly exporting to the United States.

The Biden administration’s Asia policy is disappointing not just because of its lack of substance, but because its empty economic commitments might lead Asia to pull away from the U.S. security sphere.

China is embedded in the global economy. Washington is not going to change that, at least not by itself. But Asia needs the United States to stand both as a weighty counterbalance to China’s growing political influence and as an economic hedge to resist China’s economic coercion.

The Indo-Pacific Economic Framework is a starting point, but more concrete measures are needed to strengthen U.S.-Asia economic relations. Reviving an American-led, free market-based order is essential to maintaining U.S. economic influence and the region’s prosperity and security.

Min-Hua Chiang is a research fellow and economist in The Heritage Foundation’s Asian Studies Center.