Biden Must Recognize the Armenian Genocide Once and For All 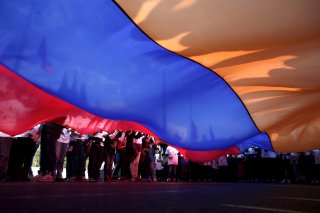 When World War I started, there were approximately two million Armenians in the Ottoman empire. Less than a decade later, only a few hundred thousand remained.

More than 1.5 million Armenians had perished following systematic killings, beatings, rape, and mass starvation, at the hands of the Ottoman empire and later the dissident Young Turks, in what is broadly recognized by historians and by major governmental powers around the world, as first major genocide of the twentieth century.

The turn of the twentieth century brought about the dramatic collapse of the dominant empires of central and eastern Europe. For most with a basic education in history, the resulting tragedies following the collapse of the Russian and German empires are familiar. The rise of the Soviet Union and subsequent famines; the ascension of Nazi Germany; and the tragic events of the Holocaust are well studied in most public schools. But only about one-in-three Americans are even aware of the Armenian genocide, whose events preceded and in many ways closely paralleled the Holocaust that followed in Europe.

For Armenians, these events have a very personal connection. Most Armenians today are likely direct descendants of the survivors of the genocide. Armenian families are able to recount the lived experiences of only a few generations prior, carrying on memories of mass graves, public hangings, and a time of great tragedy in which a culture with more than two millennia of history came dangerously close to extermination.

Despite this, the United States has historically remained ambivalent on recognizing the Armenian genocide. Although Washington did recognize the genocide in a written statement to the International Court of Justice regarding the UN Genocide Convention, and later in proclamations by Ronald Reagan, it was seemingly outright denied later by the U.S. State Department and then cynically avoided by every following president, all in an attempt to appease Turkey, a strategic NATO ally.

For Turkey, recognition of the Armenian genocide is an affront to its national identity: a damning portrayal of its national founders and an attack on the very concept of Turkism. For the authoritarian leader of Turkey, Recep Tayyip Erdogan, admitting it would deal a blow to the fierce sense of national pride among Turks that has proven critical to Erdogan and the AKP’s fragile hold on power amid unrest and economic crisis. As a result, the Turkish government has lobbied aggressively against recognition of the genocide both in the United States and in Europe, threatening bilateral relations, and banning and cracking down internally on activists who recognize the genocide. Turkey has long used every bit of its influence to prevent the United States from recognizing the genocide, leading to cynical ambivalence by presidential administrations in the United States who have thus far adopted Turkish talking points on the Armenian genocide for the sake of preserving interests abroad.

However, the alliance with Turkey is coming at a growing cost to the United States. Erdogan has consistently broken promises and antagonized its fellow NATO allies; escalating tensions with Greece; refusing to allow U.S. troops to pass through Turkey during the Iraq war, undoubtedly costing American lives and prolonging the conflict; using American-made weapons to attack the Kurds, U.S. allies that have been critical to the war against ISIS in Syria; and most cynically, in a dark irony to its past, backing Azerbaijan in its war against Armenia in Nagorno-Karabakh, sending in Syrian jihadist mercenaries, providing drones, and backing a devastating conflict that indiscriminately targeted civilian infrastructure, residential areas, and even churches.

Furthermore, Turkey’s own bargaining position relative to the United States is weakening. The lira has been devastated as the country has been plagued by an ineffective central bank, a crippled banking system, and poor economic policy. Erdogan’s consistently poor and misguided economic choices have caused significant and lasting harm for the Turkish people. On the global front, Turkey’s aggressive posturing has alienated its regional neighbors and Europe; and its unsavory relationships with Russia and China have severely crippled its ties with the United States. Given these developments, Turkey’s credibility and ability to dictate terms to the United States is undoubtedly in question.

President Joe Biden has promised explicitly to recognize the Armenian genocide, with White House sources indicating that recognition will go forward as planned in advance of Armenian Genocide Remembrance Day on April 24.

Recognition would be welcome—albeit long overdue—and would signal the administration’s dedication to pursuing justice. Most importantly, the act would end one highly visible instance of capitulation and moral compromise by U.S. presidential administrations to authoritarian governments for the sake of strategic convenience.

Hugo Dante is a Young Voices associate contributor and a D.C.-based analyst. Follow him on Twitter @hugodantejr.