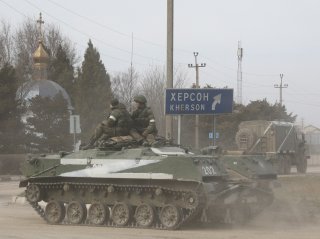 “Putin has chosen a premeditated war that will bring a catastrophic loss of life and human suffering,” Biden said in a statement. “Russia alone is responsible for the death and destruction this attack will bring, and the U.S. and its allies and partners will respond in a united and decisive way.”

Biden announced in a statement early on Thursday morning he had already spoken with Ukrainian leader Volodymyr Zelensky, informing him of Washington’s plans to rally international support for Ukraine and condemnation of Russia.

“I will be meeting with the leaders of the G7, and the United States and our allies and partners will be imposing severe sanctions on Russia,” Biden’s statement said. The President did not specify what measures would be taken against the Kremlin.

Biden said he would provide another public update detailing the U.S. response on Thursday afternoon, where he could “speak to the American people to announce the further consequences the United States and [its] allies and partners will impose on Russia for this needless act of aggression against Ukraine and global peace and security.”

Earlier this week, when Moscow recognized the two separatist republics in eastern Ukraine and deployed “peacekeeping” troops to their capitals, Biden approved a set of economic sanctions targeting Russian political figures and businesses, including several banks.

At the time of the first sanctions package, however, he made clear that continued aggression by Moscow would be met with a greater degree of sanctions, likely in the form of freezing the U.S.-based assets of additional Russian banks and instituting export controls on high-value U.S. goods, including computer and aircraft parts, preventing their export to Russia.

Perhaps the most damaging new economic measure has been the official sanctioning of the “Nord Stream 2” undersea gas pipeline from Russia to Germany, which cost Russian energy giant Gazprom around $11 billion to construct. After Putin’s decision to recognize the Donbas separatists, Berlin announced on Tuesday that it would freeze the approval process, and Biden announced the imposition of U.S. sanctions on Wednesday, effectively killing the pipeline.

Biden made clear that his government intended to continue its cooperation with NATO “to ensure a strong, united response that deters any aggression against the alliance.”