Biden Says That Qatar Will Become a Major Non-NATO Ally 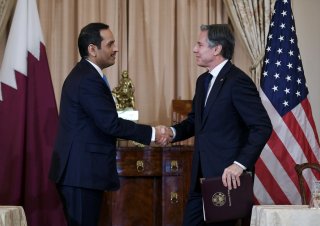 President Joe Biden indicated on Monday that he would designate Qatar, the small Arabian emirate in the Persian Gulf, as a “major non-NATO ally,” a status that confers a variety of benefits on its holder.

To justify the decision, Biden cited a variety of ways that the Qatari government and military assisted the United States, including through the relocation of tens of thousands of Afghan refugees, participation in the international coalition against the Islamic State (ISIS), and actions to stabilize the volatile Hamas-run Gaza Strip.

“This past year, our partnership with Qatar has been central to many of our most vital interests: relocating tens of thousands of Afghans, maintaining stability in Gaza and providing life-saving assistance to the Palestinians, keeping pressure on ISIS and deterring threats across the Middle East,” Biden said on Monday during a meeting with Emir Sheikh Tamim bin Hamad Al-Thani, Qatar’s monarch.

“I am notifying Congress that I will designate Qatar as a major non-NATO ally to reflect the importance of our relationship,” Biden said, adding that he thought the move was “long overdue.”

Qatar will become the third Gulf country to receive the designation, after Bahrain, where the U.S. Navy maintains a large base, and Kuwait, which aided the United States during the 2003-2011 Iraq War and in the fight against the Islamic State.

Qatar made world headlines in August and September when its Al-Udeid Air Base, long the hub of American air operations in the Persian Gulf, was used as a staging ground for Afghan refugees fleeing the Taliban takeover. Qatar continued to host Afghan refugees long after the U.S. withdrawal ended, and in November, the Biden administration signed a memorandum of understanding with the Qatari government providing for the continued hosting of “special immigrant visa” (SIV) applicants.

Qatar is also set to play a role in the Russo-Ukrainian crisis, in which tens of thousands of Russian troops have mobilized on the Ukrainian border in the apparent prelude to an invasion. U.S. and Qatari officials have requested that Qatar, one of the world’s leading producers of natural gas, increase its exports to Europe in order to make up for a loss of Russian gas in the event of Western sanctions against Moscow.

Qatar has been controversial in the United States, particularly on the American right, for its funding of Hamas and its ties to the Muslim Brotherhood’s leadership. The country’s state-sponsored Al Jazeera media network has also come under fire for an alleged anti-American bias. Under the Trump administration, AJ+, a social media network operated by Al Jazeera, was asked to register as a foreign agent. That designation is usually reserved for media outlets attempting to shape public opinion in favor of the host country, such as Russia’s RT network.

Qatar’s defenders note that its funding of Hamas is largely used to provide social services within the Gaza Strip and has the approval of the U.S. government.