Biden's Navy Secretary Pick Has His Eyes Laser-Focused on China 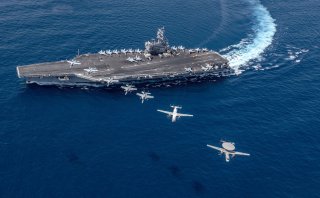 Carlos Del Toro, tapped by President Biden to become the secretary of the Navy (SECNAV), fielded questions from the Senate Armed Services Committee during his confirmation hearing earlier this week. Del Toro, a former surface warfare officer and destroyer commander, voiced unequivocal support in favor of expanding the Navy’s warship roster. “Senator, this is an incredibly important issue and I fully support the 2018 National Defense Authorization Act that has as a goal a 355-ship navy,” he said, in response to a question by Sen. Roger Wicker (R-Miss.) about fleet sizes.

Del Toro framed the need for a larger fleet as part of a larger strategic reorientation away from the Middle East and towards the Pacific. “I believe that as our nation shifts from a land-based strategy over the past twenty years fighting the wars in the Middle East to a more dominant maritime strategy in the Pacific – particularly in our efforts to deter China – I do believe that our Navy-Marine Corps team will need additional resources to be able to fully field the combat effectiveness we will need as a nation to do so,” he said. But, Del Toro added, this re-prioritization will require a greater level of investment into the Navy: “And I am committed – in fact, that it’s my responsibility – to make that case to the Office of the Secretary of Defense and the administration moving forward in the Fiscal Year [20]23 budget if confirmed.” Del Toro told Sen. Jack Reed (D-R.I.) that the procurement and full integration of unmanned systems, particularly for the Navy’s Pacific forces, is among his top priorities if confirmed.

The topic of China occupied much of the hearing, with Del Toro telling lawmakers that, if confirmed, he will be “exclusively focused on the China threat and exclusively focused in moving our maritime strategy forward in order to protect Taiwan and all of our national security interests in the Indo-Pacific theater.” China has drastically ramped up its anti-access, area-denial (A2/AD) capabilities in the Pacific, cultivating a vast and sophisticated network of assets aimed not so much at defeating, but rather containing and delaying local U.S. forces long enough to successfully occupy Taiwan. Del Toro told Sen. Josh Hawley (R-Mo.) that the U.S. still possesses certain institutional and qualitative advantages over its Chinese competitor, but warned against long-term complacency: “I do believe that China may have more numbers of platforms, but we are a more powerful and capable and experienced navy than any other navy on the globe. Having said that though, we have to remain conscious to the fact that naval superiority may not always be there either.”

Pressed repeatedly on the issue of Taiwan, Del Toro reassured lawmakers that “It's incredibly important to defend Taiwan in every way possible.” Echoing the consensus of top U.S. and Taiwanese military officials, Del Toro added that Washington must do everything possible to build up Taiwan’s “self-defensive measures.” This approach is prominently represented in Taiwan’s Overall Defense Concept, a set of doctrinal principles aimed at ensuring the Taiwanese military’s ability to impose maximum costs on a Chinese occupying force.