Big Brother Is Here: Why China’s ‘Social Credit’ Monitoring Tool Should Terrify You 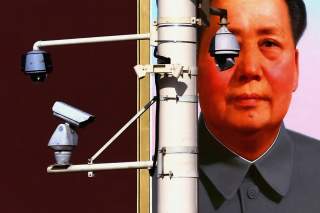 For people living in China, government repression is a fact of life.

The country earned a rating of “mostly unfree” in the latest Heritage Foundation Index of Economic Freedom and is judged politically “not free” by Freedom House.

The Chinese government has unveiled a new program that it dubbed the “social credit system.” The system won’t be fully operational until 2020, but already it has generated as many as 7 million punishments.

The system would rate the “trustworthiness” of Chinese citizens according to a wide variety of factors, such as what they buy, how they spend their time, and who their friends are, just to name a few.

The government would then take those deemed untrustworthy and punish them by not letting their children attend prestigious private schools, not allowing them to travel, and shutting down their internet presence.

The Chinese Communist government promises that the social credit system will “allow the trustworthy to roam freely under heaven while making it hard for the discredited to take a single step.”

However, one must ask what it means to be “untrustworthy.”

In the case of journalist Liu Hu, it could mean trying to expose government corruption. Other offenses could be things such as jaywalking, smoking on a train, criticizing the government, or having friends or family that speak ill of the government, all things that can lower one’s score.

This social credit system monitors people all day, every day from a variety of sources. For starters, millions of surveillance cameras with facial-recognition technology are already watching people as they go about their day-to-day activities, silently recording, judging, and updating, all in real time.

Another monitoring method is through one’s activity on one’s smartphone through apps. The Chinese closely monitor their population’s internet usage and behavior, and require internet service providers and telecommunications companies to cooperate.

Resources such as government records, financial documents, and education are also used.

All in all, it’s Big Brother come to life.

For many people, especially in the West, the very notion of a social credit system would be unthinkable. It is a system that quite literally allows the government to monitor its citizens in every aspect of their daily lives.

It restricts not only their personal privacy, but also their economic freedom, by not allowing them to participate fully in the free market if the government does not like their lifestyle.

China has made significant gains in its economic prosperity over the years. However, history has shown that nations that regularly oppress their people and stifle economic potential will never be as prosperous as nations that do not.

There are many policies that the Chinese Communist government ought to reverse, but the social credit system is the latest—and may be the most blatant—intrusion into the lives of the Chinese people yet.