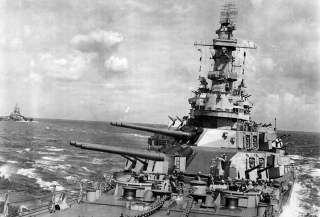 Battleships were enormous investments of national treasure. They did not merely represent national power; they were the physical manifestations of that power. They embodied the prestige of the nation, with all of the emotional commitment that implies. This made it especially heart-breaking when battleships were sunk in action. But it was perhaps worse when battleships were lost to no fault of the enemy at all. No enemy hardly meant no effort to find fault, however.

This list examines the five worst battleship accidents of the twentieth century. While all of these accidents resulted in loss of life and a reduction of maritime power, they also had a deep impact on the national psyche.

HIJMS Mustu, second ship of the Nagato class, was one of the world’s finest battleships when she entered service in the early 1920s. Fast, well-armored, and armed with eight 16-inch guns, she was the equal of any battleship in the world during the interwar period. Successive reconstructions brought Mutsu up to modern standards by the beginning of World War II, and she served honorably in several battles (although never directly engaged the enemy).

On June 8, 1943, Mutsu exploded at anchor. Her number three turret had begun to smoke, and shortly thereafter a magazine detonated, cutting the ship in half. More than 1100 members of her crew died in the explosion and subsequent sinking. The Imperial Japanese Navy quickly launched an investigation and discounted the possibility of an enemy attack. Eventually, the loss was pinned on the behavior of a disgruntled, suicidal crew member, although subsequent investigations have revealed no hard evidence to support this theory. The survivors of Mutsu were dispersed across the fleet and sworn to secrecy; some of the families of the dead were not informed of the cause of the loss until after the war.

Third ship of the Conti di Cavour class dreadnoughts, Leonard da Vinci (named after the famous inventor) entered service in May 1914. Italy would not enter the war for another year, and by that time she enjoyed overwhelming superiority over Austria-Hungary in the Adriatic. Displacing 25000 tons, she carried ten 12-inch guns and could make just over twenty-one knots.

Leonardo da Vinci saw no action in the war, acting mainly as a fleet-in-being to prevent excursions by the Austrians. On the night of August 2, 1916, Leonardo da Vinci exploded and sank during ammunition loading operations. She quickly capsized, taking 248 officers and men with her. The idea of an accidental explosion was apparently more embarrassing than enemy action, and he Italians officially blamed Austro-Hungarians, although no serious evidence has ever emerged to conclusively prove that allegation. After the war the Italians refloated Leonardo but gave up on reconstructing her because of a lack of funds.

France was the fourth ship of the Courbet class, the French navy’s first effort at dreadnought battleships. She carried twelve 12-inch guns in six twin turrets on a twenty-five-thousand-ton hull and could make twenty-one knots. France had delayed building dreadnoughts because of a lack of yard space and because of doubts about the concept but changed its collective mind when other countries began leaping ahead. In consequence, the Courbets were roundly inferior to most of their foreign contemporaries.

The French navy commissioned France in July 1914 so that she could deliver the President of France on a state visit to St. Petersburg, Russia. She was not yet quite complete and was certainly not ready for battle. Looming war clouds made the return trip fraught, but the French squadron survived without incident. During World War I she conducted limited operations in the Mediterranean before being transferred to the Black Sea to intervene in the Russian Civil War. A mild mutiny broke out, and France returned to France in mid-1919. On August 26, 1922 France struck an uncharted rock reef in Quiberon Bay and quickly began to sink. The crew remained in good order, and in the end only three men died. The accident cut France’s capital ship fleet by 1/7th, however, and resulted in the peculiar national humiliation that results when a nation’s namesake ship sinks after hitting a rock (Spain would experience the same heartache a year to the day later, when Espana ran aground and was lost).

HMS Vanguard was one of the St. Vincent class, itself one of a series of classes of battleship very similar to HMS Dreadnought. Commissioned in 1910, she displaced twenty thousand tons, could make twenty-one knots, and carried ten 12-inch guns in five twin turrets. Vanguard served with the Grand Fleet for most of the war, surviving Jutland and several other less consequential actions.

Everything changed on July 9, 1917. At some point in the night Vanguard suffered a minor explosion, followed by two much larger explosions a short time later. The ship began to sink immediately. Only three sailors survived the explosion, one of whom died shortly thereafter. An investigation concluded that the most likely cause was a minor fire in a small magazine, possibly caused by overheating from unsafe ventilation practice. 843 men died with the ship, and the wreck remains a protected war grave.

The Soviet battleship Novorossiysk began life as the Italian battleship Giulio Cesare (sister ship of Leonardo da Vinci). Giulio Cesare survived World War I and was heavily modified during the interwar period, receiving an upgraded main armament and a significantly increased speed. She participated in a variety of actions in the Mediterranean during World War II, before eventually surrendering to the Allies at Malta. She was transferred to the Soviet Union in 1948, and attached to the Black Sea Fleet

Novorossiysk was used primarily for training operations after her transfer. At some point, she either picked up a magnetic mine, or an undiscovered mine in the harbor exploded against her hull. The Soviet captain took a relaxed attitude towards the situation, believing that the ship would settle into the mud. Consequently, evacuation lagged. As it turned out, the ship took on water unevenly and capsized. 608 men died with the ship. Rumors abounded that Italian frogmen had destroyed the ship as revenge for the transfer, but no proof ever emerged.

Several other battleships experienced serious accidents; the above-mentioned Espana was a total loss in 1923 after running aground, HIJMS Kawachi experienced a magazine explosion in 1918 that sank the ship and killed six hundred men, the Soviet Poltava burned down (yes, indeed) in 1919, the Russian Imperatritsa Mariya suffered a magazine explosion in 1916, and USS Iowa was nearly lost due to a turret explosion in 1989. In nearly every case the accidents provoked serious investigation and proved deeply embarrassing to the navies involved. The accidents serve to demonstrate the fragility of the world’s most powerful warships, and indeed the fragility of national military prestige itself.