Big Guns: The Army Is Developing a 'Cannon' To Kill Targets 1,000 Miles Away 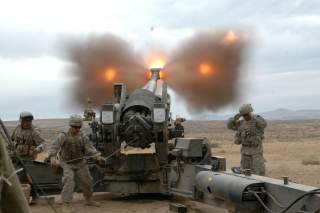 Recent statements by the U.S. Army indicate that it is enthusiastically seeking to resurrect a type of weapon long thought to have been consigned to the cobwebs of history—the long-range “super gun.” The Pentagon is talking up a project to develop a Strategic Long-Range Cannon with a mind-boggling range of 1,150 miles—far enough for cannons based in Europe to bombard targets in western Russia.

During the first half of the twentieth century, armies grew enamored with the concept of “super guns”—huge artillery systems able to bombard cities up dozens of miles behind the frontline. During World War I, Imperial Germany deployed the infamous Paris Gun, which could launch huge 211-millimeter shells to bombard the French capital from up to eighty miles away, terrorizing its populous.

Later during World War II, Hitler devoted considerable resources to building V-3 “Super Cannons” in Normandy, intended to lob shells over the English Channel to sustain a round-the-clock bombardment of the city of London. Fortunately, Allied bombers and ground troops prevented the V-3 from ever being used against its intended target.

However, in terms of genuine super guns, the last real effort were the Project Babylon super guns designed by Canadian engineer Gerald Bull at the behest of Saddam Hussein. Various prototypes were intended to hit targets up to 450 to 625 miles away. Bull was assassinated by Israeli agents before the weapons could be completed

Long-range and super-long-range artillery systems have faded from arsenals of Western militaries because they have found a simpler and more precise solution for “servicing” targets deep behind enemy lines: air or drone strikes, as well as GPS-guided rocket artillery.

However, as the U.S. Army has begun reorienting away from counter-insurgency roles to great-power conflicts, it has appreciated that in a conflict with a peer-opponent it wouldn’t be able to count on the lavish on-call air support it has enjoyed in recent conflicts. New long-range air defense missiles like the S-400 present a major obstacle which can only be overcome with highly planned suppression operations that take time to plan and execute. Artillery and tactical rocket or missile systems will need to fill the gap in air-support-denied environment.

This explains why the Russian Army, which knows it can’t assume air superiority in a conflict with NATO, has invested far more in artillery systems such as Koalitsya and the BM-31 Uragan rocket launcher which outrange U.S. counterparts.

In fact, artillery, tactical rockets and missiles might play a key role in knocking out an adversary’s air defense missiles and radars, allowing air power to be fully unleashed. This occurred during the Yom Kippur War, when Israeli long-range M107 artillery and commandoes disguised in Egyptian uniforms helped knock out fixed Egyptian air defense sites on the western side of the Suez canal, allowing the hard-pressed Israeli Air Force to hammer ground targets at full effectiveness.

The army has therefore prioritized a program to extend the range of its conventional and rocket artillery, dramatically called Long-Range Precision Fire—as detailed in this article. This includes a concept for a super gun with a range of 1,100 miles—many times the range of any artillery system on the planet.

The program was recently mentioned again in September 2018 when Gen. John Murray testified before the House Armed Services Committee: “We are looking very hard and starting down the path of hypersonics and also looking at what we call the Strategic Long-Range Cannon [SLRC], which conceivably could have a range of up to 1,000 nautical miles [1,150 miles].”

It’s unclear how on Earth such an extraordinary range could be achieved, though various analysts have suggested it may involve a combination of improved propellants and rocket-assistance in flight. Exotic delivery systems such as railguns have also been suggested. In an interview with Sydney Freedberg of Breaking Defense, Army Col. John Rafferty, director of the Long-Range Strategic Fire program, claims the SLRC simply involves scaling up technologies already being developed for the rocket-boosted shells of the M109 howitzer.

The SLRC would likely use GPS-guided shells, reducing the need for larger warheads sizes and making the system precise-enough to be useful against military targets instead of simply serving as a terror weapon like the Paris gun. Even with a GPS guidance system and a rocket booster, the SLRC’s supersonic artillery shells could be considerably cheaper than a slower cruise missile with similar range, allowing for a greater sustained volume of fire.

However, a cautionary note: the navy’s new Zumwalt stealth destroyers were supposed to deploy with advanced gun systems that could shoot guided artillery shells at targets up to 83 miles away. That’s supposed to, because the navy canceled the guns after it emerged each shell would cost $800,000—not far from the price of a cruise missile! The SLRC’s projectiles, needless to say, would need to be cheaper for the weapon to provide value on a bang-for-buck basis.

Such a gun could usefully fire at diverse fixed, high-value assets located far behind the frontlines, such as fuel and ammunition dumps, command centers, air defense radars, hangars and flight lines at airbases, and even enemy missile and artillery units. However, the army would either need to develop very long-range surveillance assets to locate such targets which it hasn’t possessed in the past, or learn to integrate such intel from other services.

Rafferty also indicated the SLRC will at least be “moveable” or “relocatable,” though not “mobile.” Realistically, the huge weapon would have to be based in Europe—and how the Pentagon could deploy such a massive system secretly while also securing permission from a host government is a rather pertinent question. If SLRC were perfected and deployed, Russia would certainly attempt to ascertain its location and dedicate assets to destroying it should a conflict break out. Just how flexibly the army could shift or obfuscate the SLRC’s position is therefore critical to judging its viability.

The army isn’t only counting on SLRC, however—it’s also planning a ground-launched hypersonic missile with a range of 1,400 miles. If the missiles themselves can be perfected, the launch platform would likely be less unwieldy than the SLRC. However, it’s hard to see how such a missile could avoid being perceived as a violation of the Intermediate-range Nuclear Forces treaty (INF), which forbids the development of ground-launched missiles with a range between 310 and 3,410 miles. Though there are various dubious technical loopholes that could be used to justify this, pursuing it could signal the death knell of the INF treaty, which Russia already appears to be violating.