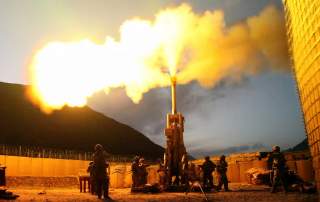 The Army is building prototypes of a new artillery cannon that can more than double the range of existing weapons and vastly alter the strategic and tactical landscape shaping land war into the future.

The Army program, called Extended Range Cannon Artillery, has been developing for several years; it is now entering a new phase through an Army deal with BAE Systems to build “Increment 1” prototypes.

“This prototype phase will address capability gaps in the Army’s indirect fire systems and improve the rate and range of fire with the development of power distribution software and hardware integration solutions,” a BAE Systems statement said.

During testing thus far, the Army has successfully fired a 155mm artillery round 62 kilometers - marking a technical breakthrough in the realm of land-based weapons and progressing toward its stated goal of being able to outrange and outgun Russian and Chinese weapons.

Currently, most land-fired artillery shot from an M777 Towed Howitzer or Self-Propelled Howitzer are able to pinpoint targets out to 30km - so hitting 62km dramatically changes Army offensive attack capability. As part of an effort to ensure the heavy M777 is sufficiently mobile, the Army completed a “mobility” demonstration of ERCA prototypes last year.

BAE Systems is working with the Army’s Combat Capabilities Development Command Armaments Center on the prototypes.

ERCA will be integrated onto the M109A7 Self-Propelled Howitzer and will require the M109A7’s current 39-caliber turret to be replaced with a 58-caliber, 30-foot long gun barrel with the objective of creating firepower double the current range, a BAE Systems statement said.

Army senior leaders are clear that the intent of the effort is to regain tactical overmatch against Russian and Chinese weapons. Citing the Russian invasion of Ukraine as a “wake-up call,” senior Army leaders consistently say that Russian weaponry, tactics and warfare integration are causing a particular concern.

“In Ukraine, we saw the pairing of drones with artillery, using drones as spotters. Their organizational structure and tactics were a wake up call for us to start looking at a more serious strategy,” Murray explained.

The Army’s 2015 Combat Vehicle Modernization Strategy specifically cites concerns about Russia’s use of advanced weapons and armored vehicles in Ukraine.

ERCA is one of several current initiatives intended to address this. Accordingly, the Army is now prototyping artillery weapons with a larger caliber tube and new grooves to hang weights for gravity adjustments to the weapon – which is a modified M777A2 mobile howitzer. The new ERCA weapon is designed to hit ranges greater than 70km, Army developers said.

“When you are talking about doubling the range you need a longer tube and a larger caliber. We will blend this munition with a howitzer and extend the range. We are upgrading the breach and metallurgy of the tube, changing the hydraulics to handle increased pressure and using a new ram jet projectile – kind of like a rocket,” a senior Army weapons developer told Warrior Maven in an interview last year.

“The ERCA program develops not only the XM907 cannon but also products, such as the XM1113 rocket assisted projectile, the XM654 supercharge, an autoloader, and new fire control system,” an Army statement from last year said.

The Army previously demonstrated a modified M777A2 Howitzer with an integration kit for the mass mock-up of the modified XM907 ERCA cannon at Yuma Proving Ground, Arizona.

ERCA changes the Army’s land war strategic calculus in a number of key respects, by advancing the Army’s number one modernization priority – long-range precision fires. This concept of operations is intended to enable mechanized attack forces and advancing infantry with an additional stand-off range or protective sphere with which to conduct operations. Longer range precision fire can hit enemy troop concentrations, supply lines and equipment essential to a coordinated attack, while allowing forces to stay farther back from incoming enemy fire.

In fact, senior Army developers specifically say that the ERCA program is, at least in part, designed to enable the Army to out-range rival Russian weapons.