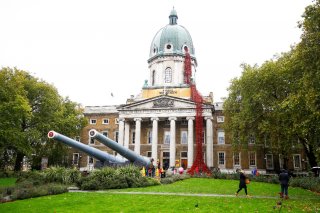 Outside of the Imperial War Museum's (IWM's) main facility in London is a pair of Royal Navy 15-inch guns. The museum was founded in 1917 and was originally intended to record the civil and military war effort and sacrifice of Britain and the Empire during the First World War. Over the years that have followed, the museum has expanded greatly and since 2012 has focused on the history of modern war as well as the wartime experience.

Today the museum, which is now housed in the former Bethlem Royal Hospital, has in its collection a naval gun from the HMS Lance¸ which had fired Britain's first shot during World War I, but it is a misconception that it is one of the two large guns that serve to "guard" the front entrance.

In fact, while each was mounted on Royal Navy warships during the conflict, those were actually from different vessels.

The first was from the HMS Ramilles (07), which was one of five Revenge-class super-dreadnoughts constructed during World War I. Completed in late 1917, Ramilles arrived too late for the war effort and took part in no combat operations against Germany. However, she was deployed to Turkey twice in response to the crises arising during the Greco-Turkish War, while she also saw limited involvement during the Allied intervention in the Russian Civil War. The battleship then took part in escort duties in the Atlantic during World War II and was the flagship for the Allied invasion of Madagascar in 1942—the British-led campaign to capture the Vichy French-controlled island.

After being torpedoed by a Japanese midget submarine while in port in Madagascar, the vessel was repaired and updated for coastal bombardment duties—and Ramilles supported the Normandy landings as well as the invasion of the South of France.  For those reasons, another misconception is that the gun fired at German positions in France—but sadly that's not the case either, as the gun was removed from the warship in 1941.

The other gun at the entrance of the museum was from the HMS Resolution (09), a sister ship of the Revenge-class. She also saw service in the Greco-Turkish War and supported the Franco-British intervention in the Russian Civil War. The gun was removed and remounted, where it was used on HMS Roberts, the lead vessel of a World War II-era monitor that provided bombardment support during Operation Torch in North Africa in 1942, and during the Operation Husky Invasion of Sicily followed by the Allied landings near Salerno as part of Operation Avalanche. The 15-gun was also employed during the D-Day landings at Sword beach.

Thus while one of the guns likely was only used in limited operations, the other was fired in support of crucial Allied landings. Both were installed in front of the Imperial War Museum in 1968.

History of the 15-inch Gun

The 15-inch gun had been designed during the First World and was first used operationally in 1915 by the Royal Navy battleship HMS Queen Elizabeth at Gallipoli. The 15-inch Mk 1 Naval Gun was eventually fitted to twenty-two ships of the Royal Navy, including eleven battleships, five battlecruisers, and six monitors. It was used throughout both World Wars and was capable of destroying enemy warships and shore targets.

In addition to serving as a memorial to the United Kingdom's naval might and to honor the Royal Navy, the guns have been the center of calls for peace as well. In the 1980s the guns were surrounded during the Greenham Common Women's Peace Camp, a protest that called for the removal of nuclear weapons on British soil. Protesters held hands and formed a circle around the naval guns.

More recently, in August 2017, to mark the final weeks of the IWM London's People Power: Fighting for Peace exhibition, in which two large-scale flowers were temporarily placed in the naval gun barrels.