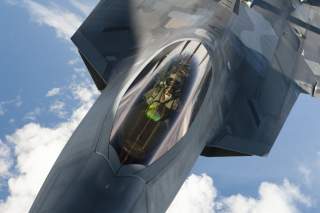 U.S. pilots in the Pacific can’t get realistic combat training.

The reason? Lack of adequate training facilities in the U.S. Indo-Pacific Command (USINDOPACOM), according to an audit by the Department of Defense Inspector General.

“As a result, the aviation units in the USINDOPACOM area of responsibility could not train as they would fight,” auditors concluded.

The report listed multiple problems, some of which were redacted in the version released to the public. “Most military training ranges were established over 75 years ago when the United States prepared for World War II,” the IG noted. Today’s aircraft are faster and have longer-range weapons, so they need a bigger training area.

But expanding airspace to train aircraft and helicopter pilots requires years to obtain FAA approval. And even then, environmental concerns are an obstacle, not just the mandatory environmental impact studies, but finding a location that doesn’t impact either civilian areas or endangered species. In Hawaii, for example, the Pohakuloa Training Area “was home to 26 threatened and endangered species and contained 1,200 identified archaeological sites, which must be protected by range officials. According to an Army official, the protection of endangered species and archaeological sites contributed to the limited range space available for training, which is about one-third (70) of the 210 square miles of range land.”

As for aviation training at Schofield Barracks in Hawaii, “the range was surrounded by neighborhoods that resulted in the range officials receiving noise complaints from nearby residents. According to an Army range official, when aviation units trained at the Multipurpose Range Complex, the Army had to close two other ranges nearby for safety concerns of the soldiers.”

The end result is that pilots can’t fly or fire weapons as they would in combat, not even when using facilities in other nations. For example, U.S. fighter pilots were unable to drop JDAM smart bombs at the Pilsung training range in South Korea. Using Hellfire missiles and smart bombs on Japan’s Tori Shima island is complicated because “Tori Shima was a piece of land that was exposed only during low tide, creating difficulties in completing training.”

Problems such as urban sprawl blocking training base expansion are not necessarily the military’s fault. But nor is it the fault of the Tasmanian tiger, the Alabama red-bellied turtle, and other endangered species. The IG also said lack of coordination between the Air Force and Army hampered training at the Joint Pacific Alaska Range Complex, or JPARC. “Although JPARC was significantly larger than the other ranges in our sample, pilots stated that it did not support the Army’s higher-level aviation gunnery requirements and did not support the Air Force with modern electronic warfare systems.”