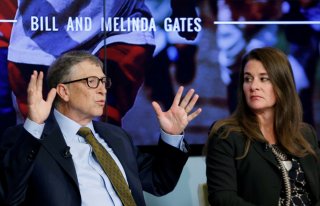 The Chinese public’s fascination with Bill and Melinda Gates is an international social phenomenon. It is also potentially a geostrategic inflection point if the couple shows the necessary vision and courage to take advantage of it.

830 million Chinese citizens viewed the May 4 announcement of their divorce—nearly 60 percent of China’s population. That gives the couple unique and unprecedented access to the Chinese people, greater than any outside entity can reach and second only to the exclusive informational dominance of the Communist government itself.

The painful Gates marital breakup can be used, incredibly enough, to dramatically diminish the escalating risks of war between China and the United States over Taiwan, which senior U.S. military officials recently warned could break out “sooner than expected.”

Xi Jinping and his Communist colleagues constantly refer to nationalistic Chinese public opinion as compelling them to act against Taiwan. Yet, as the Gateses probably know, the average Chinese does not much care about Taiwan's independent existence. In fact, most admire its economic and political success, and many envy its democratic transition from dictatorship.

Bill and Melinda’s personal decision—which their fans in China find earthshaking—can put to good use the intense attention the Chinese people are paying to their every word and action. By issuing a single brief statement together, they can prevent what Henry Kissinger recently called a looming “colossal” conflict between China and the United States that would erupt over Taiwan and rapidly escalate from a regional to a world war. And the Gates divorce itself presents an incomparable opportunity to halt that perilous scenario.

As Melinda has said of their parting, “After long consideration, we have concluded that for the next phase of our lives, we can no longer grow together.” The same is true of the 70-year separation between China and Taiwan. The only conceivable way for China to achieve unification with Taiwan (not reunification since the Communist government has never ruled the island) is by a catastrophic war.

Indeed, former President Richard Nixon, who in 1972 “opened China to the world and opened the world to China,” himself concluded by 1994 that China’s absorption of Taiwan was no longer possible, and he used the analogy of a divorcing couple to make the point. He wrote in his book, Beyond Peace, that “Like a couple who have gone through a bitter divorce, China and Taiwan publicly have irreconcilable differences. The separation is permanent politically, but they are in bed together economically.”

Bill and Melinda Gates can make a historic contribution to world peace by calling on Beijing to recognize reality and do the right thing for all people on both sides of the Taiwan Strait. Because of irreconcilable differences, a situation they know in their personal lives, they could encourage the Chinese people to urge Beijing to officially “divorce” Taiwan and let both live peacefully and separately while cooperating economically and culturally.

That brief but powerful message received directly from the admired couple by most of China’s population, can dramatically and decisively influence Chinese public opinion, dispel the reputed nationalistic pressures on Xi Jinping’s government, and alleviate America’s longstanding strategic dilemma over going to war with China or abandoning a democratic friend and partner.

With that single stroke, either as their last act as a married couple, or their first joint action as separate individuals, Bill and Melinda Gates can quietly but dramatically eliminate one of the world’s most dangerous problems that generations of diplomats and strategic planners have been unable to resolve.

Of course, they could also do the opposite, as Kissinger and others have done, by pleasing a small group in China’s leadership, and urge the people of Taiwan to accept the kind of fate that has befallen the population of Hong Kong. But the Gateses have indicated they will continue to work together at their Foundation and presumably still share its declared ideals in pursuit of a better world. Mutually agreed divorce is the right thing for Bill and Melinda and, as Nixon said, it is the right thing for China and Taiwan.

Joseph Bosco served as China Country Desk Officer in the office of the secretary of defense, a nonresident senior associate at the Center for Strategic and International Studies, and a nonresident fellow at the Atlantic Council of the United States. He is presently a member of the advisory board of the Global Taiwan Institute and a fellow of the Institute for Corean-American Studies (ICAS).