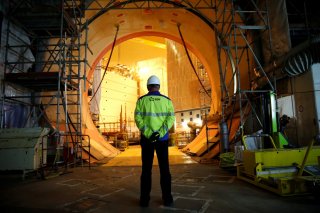 TerraPower, the nuclear company founded by Bill Gates, just announced an agreement with private funders, including Warren Buffet, and the state of Wyoming to site its Natrium fast reactor demonstration project there. It is the Department of Energy’s (DOE’s) flagship “advanced” small modular reactor (SMR) project, for which DOE will pay a heavy share, starting with $80 million this year.

“Fast” means Natrium relies on energetic neutrons as opposed to “slow” neutrons that drive all our current power reactors. That’s also what gives it the “advanced” label. DOE and nuclear enthusiasts have advertised that small, factory-built, modular reactors will be cheaper and safer, and will be so attractive to foreign buyers that they will revive America’s nuclear industry, currently dead in the water; that they will enable the United States to compete in an international market now dominated by China and Russia; and they will provide a solid nuclear industrial base for meeting U.S. military nuclear requirements.

With all these supposed advantages it is not surprising that DOE is pouring money into SMRs. And based on little more than slogans, it is also getting enthusiastic bipartisan Congressional support. To understand what is really going on, one has to look beyond most of DOE’s small reactor projects, mere distractions with little future, to TerraPower’s Natrium. This is not, by the way, the company’s original “traveling wave” concept. That one apparently did not work.

The Natrium project, more than any other, offers the possibility to fulfill the nuclear community’s eighty-year-old nuclear dream to develop a nuclear power plant that can run on all mined uranium, not just on the relatively rare uranium-235 fissile isotope, as current reactors do, thereby vastly increasing fuel resources. It does this by first turning the inert uranium into plutonium and then using the plutonium as fuel. It can even “breed” excess plutonium to fuel new fast reactors. Those outside the nuclear community have no idea of the grip this captivating idea has on nuclear engineers’ minds. It has, however, serious practical drawbacks. What concerns us here is that plutonium is a nuclear explosive—a few kilograms are enough for a bomb, and it is an awful idea to have untold tons of it coursing through commercial channels.

Fast breeder reactors are not exactly a new idea. The DOE’s predecessor agency, the Atomic Energy Commission, pushed fast breeder reactors in the 1970s as the energy solution in what was thought to be a uranium-poor world. It turned out we live in a uranium-rich world, so the expensive project, whose safety problems had not been fully resolved, made no economic sense. Congress canceled the Clinch River Fast Breeder Reactor demonstration project in 1983. Enthusiasts tried but failed to revive fast reactors during the second Bush administration. That effort flopped. Now they are trying again with Natrium, a scaled-up version of a General Electric design for a small sodium-cooled, plutonium-fueled fast breeder reactor (natrium is German for sodium).

TerraPower, of course, is Bill Gates’s company. One might ask, naively, why he of all people needs government support if the Natrium project is as good as he apparently thinks it is, but let us pass over that to focus on what the project technically entails and the difficulties those technical details pose.

Chris Levesque, TerraPower’s CEO, told a March 25 Senate Energy Committee hearing that the Natrium would be fueled with uranium enriched to 20 percent U-235 rather than explosive plutonium. But will that remain the preferred fuel if the Natrium reactor takes off and is offered for export? Currently, only a handful of nations can make 20 percent enriched uranium. It’s hard to believe that foreign customers will want to be tied to a U.S. supply of this fuel.

If they want another source for 20 percent fuel, will the United States go along with foreign enrichers offering it? We currently oppose Iran producing it on grounds that such material is too close to bomb-grade uranium. In a 1976 statement on nuclear policy, President Gerald Ford said the United States would not act in its civilian program in a way contrary to what we ask of others. Has this level of consistency and respect for others gone by the boards?

The thing to remember is that the principal reason for preferring fast reactors, historically the only reason, is to gain the ability to breed plutonium. That is surely what foreign customers will want. The original GE design on which Natrium is based included an onsite reprocessing plant. So configured, the reactor would make and reuse massive quantities of material that could also be used as nuclear explosives in warheads.

The potential weapons link is obvious in India, which has refused to allow international inspections of its fast reactor. And the recent disclosure that China is building two fast reactors more or less under wraps immediately provoked international concerns about Chinese possible weapons plutonium production. The plutonium produced in the fast reactor uranium “blanket” surrounding the reactor core is well over 90 percent plutonium 239, which is ideal for nuclear weapons.

At the March Senate hearing, TerrPower’s CEO described a future for the Natrium project that had almost unlimited export opportunities for Natrium and much larger plants. As Levesque explained, the current Natrium offering is a 345-megawatt (electric) machine—not so small in itself—because that size was what today’s market would accept. As TerraPower gained experience, though, he anticipated “growing Natrium output back up to gigawatt scale,” the size of current large light water reactors. The obvious conclusion is that, despite the current ballyhoo about the economic advantages of small units, TerraPower doesn’t think the smaller units would be as economic as larger ones. The “small” label is apparently just for the easily impressed.

Nor are the touted safety advantages of fast reactors what they seem. The low pressure of sodium-cooled reactors is an advantage. But sodium burns violently when exposed to air or water. And a fast reactor needs a large, concentrated amount of fissile material which becomes more reactive if it loses its coolant. In short, the comparison with the safety of light water reactors is at best a draw.

The March Senate hearing discussion about competing with Russia and China made clear the nuclear industry’s business plan centers on exporting fast reactor technology around the world, however implausible this may be given the cost and safety issues we’ve noted. The question for the U.S. government is, should it be encouraging nuclear technologies that threaten to flood the world with untold tons of plutonium?

Presidents Gerald Ford and Jimmy Carter made it U.S. policy to discourage commercializing of plutonium-fueled reactors. Ford’s words bear repeating: In 1976, he announced that the United States wouldn't support reliance on plutonium fuel and associated reprocessing of spent fuel until “the world community can effectively overcome the associated risks of proliferation.” Fast reactors like TerraPower’s Natrium don’t meet this test.

Victor Gilinsky serves as program advisor to The Nonproliferation Policy Education Center, is a physicist, and was a commissioner of the U.S. Nuclear Regulatory Commission during the Ford, Carter, and Reagan administrations.

Henry Sokolski is the executive director of the Nonproliferation Policy Education Center in Arlington, Virginia, and author of Underestimated: Our Not So Peaceful Nuclear Future. He served as deputy for nonproliferation policy in the office of the U.S. secretary of defense during the George H.W. Bush administration.