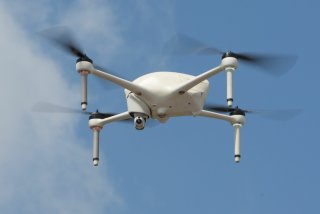 A drone was spotted flying above Yankee Stadium during a Saturday night game between the New York Yankees and Boston Red Sox, the Associated Press reported.

The Yankees announced that the FAA is investigating the object. The FAA does not allow drones to fly above sporting events while games are in progress.

NJ.com published a video of the drone, which appeared as green dots at first.

Several drones have been spotted above Major League Baseball games, most notably during the 2020 season, when fans were not allowed in stadiums for the majority of the season due to the Covid-19 pandemic. During one 2020 game between the Minnesota Twins and Pittsburgh Pirates at Target Field in Minneapolis, the field was evacuated due to a drone appearing overhead. It was believed to be Major League Baseball’s first-ever drone delay.

Drones were used, albeit authorized and legal, at the same stadium for the NHL Winter Classic earlier this year.

There’s no word about anyone being arrested in the Minnesota incident, but at the time MLB called for tougher laws to prevent such occurrences.

“It is important for drone hobbyists to understand that flying drones over stadiums during games is dangerous, against the law, and could subject them to criminal prosecution and civil liability. In five instances this season, Umpires have responded to these incidents appropriately and in accordance with our protocols,” Major League Baseball said in a 2020 statement.

In 2019, a California man was charged with violating two separate Temporary Flight Restriction (TFR) areas, after flying an unauthorized drone over two different NFL games on the same day in 2017. The man was accused of flying the drone and dropping “anti-media leaflets,” both at a San Francisco 49ers game at Levi's Stadium and an Oakland Raiders game at what is now called RingCentral Coliseum later that day.

The man was later hit with federal charges. Similar fliers, featuring swastikas, were dropped on the outside of an Ariana Grande concert in 2019, featuring the name of the man indicted for the football fliers.

The Yankees-Red Sox series this week was controversial for another reason: Fox Sports used a graphic during its broadcast of Saturday's games that arrayed the logos of the Yankees and Red Sox over the September 11 memorial at Ground Zero, with each logo appearing in the reflecting pools that are on the footprints of where the World Trade Center towers once stood.

“During tonight’s telecast, we used poor judgment on the use of a graphic. We sincerely apologize and regret the decision.”