The Black Sea: How America Can Avoid a Great-Power Conflict 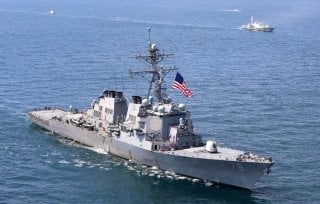 Many Americans find the whole swath of territory in eastern Europe, near Russia, very far away and hard to conceptualize. This part of the world involves a number of countries, small and large, that are generally not the most frequently discussed in American news nor frequented by American tourists. To make sense of much of this remote region, it can be helpful to take a perspective that centers on the Black Sea and views that body of water as the key point of reference for much of the region. Doing so not only helps clarify what Russia is up to in its near-abroad, but also shines a spotlight on Chinese activity, and what is required of America in response.

The Black Sea region is best viewed as having three big anchors—Ukraine to the north, Turkey to the south, Russia to the northeast. Then there are three countries on either side of the region—Romania, Bulgaria and Moldova on the left or west, Georgia and Armenia and Azerbaijan to the east. Turkey, Romania and Bulgaria are NATO allies; America and NATO’s other twenty-six members (making for a grand total of thirty) are sworn to their defense through a mutual-defense treaty. And even though Ukraine is not a NATO ally, the United States did promise (along with Russia) back in 1994 to help protect its security—which is why the Russian aggression against Ukraine since 2014 has been so concerning.

None of this is to say that America needs to prepare for war against China, or Russia for that matter, in the Black Sea region. The Black Sea is far from the Chinese coasts; the main military concerns are with China in the western Pacific region. Moreover, as Chairman of the Joint Chiefs of Staff, Gen. Mark Milley, told a group of people at the Brookings Institution on Dec. 2, America is in a period of great-power competition but it is not in a period of conflict, and the goal should be to keep things that way while competing effectively against Russian and Chinese influence.

Indeed, as with many parts of the world, China does not pose a direct military threat, rather it challenges American interests in the realms of economics, technology, and espionage. To be specific:

— China is offering loans, through its Belt and Road Initiative, to many countries along a vast periphery and perimeter. This includes the Black Sea. But buyer beware: China’s money comes with strings. America needs to help regional countries understand this and so that they can accept any loans with their eyes wide open.

— China’s software and hardware are optimized for intrusive monitoring of the population, . . . ie Black Sea inhabitants will be monitored if and when they accept Chinese technology, even from private firms, in realms like 5G. China’s civil-commercial-military-intelligence “fusion law” formalizes this; Beijing isn’t even pretending to do otherwise.

— China is actively trying to buy into sectors that have huge security implications. A prime example is the manufacturer Motorsich in Ukraine, which builds high-quality engines for helicopters and aircraft. A struggling Ukrainian economy may make such assets relatively easy pickings for a purportedly friendly but also devious foreign investor

— In general, default on Chinese loans results in Chinese ownership of assets—and the default is a distinct possibility when big projects are foisted upon unsuspecting countries with weak economies and a lack of transparency in their investment decisions.

Fortunately, there is much that America can do to help in ways that are already showing promise in other regions around the world. Malaysia and Pakistan, for example, have figured out that they can say no to massive Chinese projects that would bring them little in the way of jobs (since China brings along most of its own workers for Belt and Road projects) and much in the way of debt. A central database that tracks such Chinese efforts, and helps countries do the calculus of pros and cons for each proposed investment before signing any contracts, can go a long way towards defeating such practices.

In short, America needs to be present. It needs to be a part of the leadership in this region. The EU and NATO are important, to complement our diplomacy with both those organizations, the incoming Biden administration should recognize the Black Sea as a region of importance, requiring a focus on diplomacy and economic engagement.

The good news is that war does not have to be the future for the Black Sea. Military support is important, but it is just one of our tools for engagement in this vital region. To avoid bad news, America must engage effectively, be patient, and sustain our effort, . . . when it chooses to do so, America is good at it. It is time to choose.