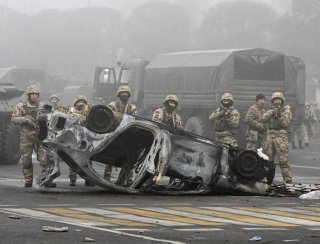 In Kazakhstan, transformation of initially peaceful protests into a full-blown revolt against the government has caught many observers off guard—and this should not be surprising, considering the sheer magnitude and rarity of ongoing demonstrations. The failure to foresee this unrest makes it possible to classify it as a fat-tail event, or a Black Swan (a term coined by Nassim Taleb).

Tail risks are an unavoidable feature of human events—and the failure to realize their fundamental unpredictability, coupled with a profound impact they have on the course of events, lies at the heart of dilemmas faced by autocrats. For foreign policymakers, both in the United States and around the world, it is critical to take tail risks into account in order to safeguard the system from crises. As Taleb and Mark Blyth write in their 2011 Foreign Affairs article, “it is both misguided and dangerous to push unobserved risks further into the statistical tails of the probability distribution of outcomes and allow these high-impact, low-probability ‘tail risks’ to disappear from policymakers’ ﬁelds of observation. What the world is witnessing in Tunisia, Egypt, and Libya is simply what happens when highly constrained systems explode.”

Autocracies are especially prone to tail risks, in no small part due to the Hayekian “knowledge problem”: information necessary for policy action is dispersed, and the attempts of centralized regimes to access it are doomed because “knowledge of the circumstances of time and place,” by its nature, cannot be communicated to the top effectively. Besides, repression forces people to behave in ways that conform to the state’s political views, with citizens choosing to conceal their true opinions—a phenomenon the researchers call “preference falsification,” which further complicates autocrats’ understanding of their citizens.

Acting on the basis of incomplete knowledge, autocrats’ perception of reality becomes detached from the real situation—and this divergence becomes larger as the level of repressions increases, thereby making the “blow-up” at critical moments all the more dangerous. For instance, the Soviet Union experienced decades of relative stability following the end of the Second World War—only to be disrupted by rare but dangerous outbursts of volatility such as the Novocherkassk massacre of 1962. The release of volatility induced by Mikhail Gorbachev’s glasnost and perestroika eventually led to the collapse of the system in 1991.

The same idea could be applied to the ongoing revolt in Kazakhstan. However, our analysis is complicated by the fact that while it is easy to explain the causes of Black Swans with the benefit of hindsight, the same cannot be said about foreseeing them: cause-and-effect relationships seem straightforward when an event has already happened. There is substantial evidence that state coercion tends to increase protests. From this perspective, President Kassym-Jomart Tokayev’s decision to accept the demonstrators’ demands and lower the gas prices to their previous levels should have quelled the rebellion in its infancy—but instead, the situation only became worse.

When tail risks hit, conventional models of reality cannot be guides for policymakers, because inferences based on the observation of past data cannot be applied to unprecedented events. Thus, even when armed with facts backed up by academic research, policymakers have to grapple with inherent uncertainty in our perception of the world. Spontaneous bottom-up processes such as protests (especially those that do not have a clear leader, as in Kazakhstan’s case) are hard to control and predict, and the dynamics of emergent systems cannot be reduced to the motivations of individual actors.

Retrospectively, however, we can find an explanation for the apparently paradoxical consequences of Tokayev’s actions. According to a research by Haifen Huang, “Citizens’ preferences and costs of challenging the government are such that they will rebel against the government if they know it is weak, but will not rebel if they know it is strong.” It follows then that when an autocrat is perceived as being weak—such as in the case of Tokayev’s concessions to the demonstrators—people are no longer deterred from protesting against the regime and do not fear the dictator. This means that Tokayev’s call to the Russia-led Collective Security Treaty Organization to deploy troops to crack down on mutineers will only solidify his image as a weak and unpopular leader, thereby further emboldening demonstrators.

As the New York Times reports, according to Vladislav Inozemtsev, professor at Moscow State University, “Under a surface appearance of stability, a pool of discontent might be brewing that could explode at any moment,” which presents a particular danger for post-Soviet countries. The revolt in Kazakhstan is an example of just one of the many tradeoffs authoritarian regimes have to face—and a sign of things to come in other post-Soviet autocracies.

Autocrats have to strike a precarious balance between “carrots” and “sticks,” and the difficulty of managing such tradeoffs is why dictators, especially in personalist autocracies, lose power more often—and violently—than other regime types. Predicting Black Swans is futile; instead, a system should be liberalized in order to be able to provide venues for expressing citizens’ views, preventing discontent from hiding under the surface. Revolutions bring into open unfulfilled needs and suppressed views of the citizens. Changes in political power are inevitable—and it is in the hands of autocrats to decide whether or not this change occurs peacefully through free and fair elections, or violently via armed rebellions.

Sukhayl Niyazov is an independent writer. His work has appeared in The National Interest, The American Conservative, City Journal, The Federalist, Public Discourse, Law and Liberty, among other publications.