Blast From the Past: Impeachment Lawyers Might Recycle Mueller Materials in Senate Trial 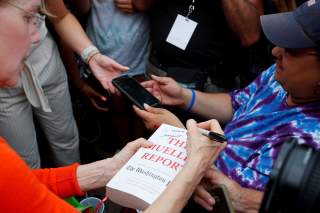 The U.S. Court of Appeals for the D.C. Circuit asked House lawyers and the Department of Justice to address whether the House’s impeachment vote effectively ended a legal fight over a subpoena for the Mueller grand jury materials, which are under seal. Congress cited impeachment proceedings as one justification for its subpoena.

“The Committee continues to seek the withheld material for use in impeachment — both because the material bears on the current Articles of Impeachment and could accordingly be used in a Senate trial on those Articles, and because the Committee is continuing to conduct its inquiry into whether the President committed other impeachable offenses,” Monday’s filing from House lawyers reads.

“Expedited consideration of DOJ’s appeal is now even more essential to prevent the Trump Administration from obstructing Congress in its efforts to obtain the information it needs to carry out its constitutional responsibilities,” the filing adds.

The grand jury materials bear on both articles of impeachment, House lawyers wrote. One passage in Mueller’s final report pertains to the first article, abuse of power. That section concerns Trump campaign chairman Paul Manafort and allegations of Ukrainian interference in the 2016 presidential election. Trump asked the new Ukrainian administration to investigate those charges. Another section that piqued Democratic interest involves a peace plan for the Ukraine’s ongoing conflict with Russia.

House lawyers said grand jury evidence supporting those passages “would be important to the House’s presentation of the evidence and the Senate’s consideration of the first Article of Impeachment.”

Other grand jury records go to the second article, obstruction of Congress, because they could elucidate the president’s alleged attempts to obstruct the Mueller investigation. Such evidence could help establish a pattern of behavior relevant to Senate proceedings, House lawyers argued

“Although the Second Article of Impeachment focuses on President Trump’s categorical and indiscriminate obstruction of the House impeachment inquiry, the consistency of this obstruction with his broader pattern of misconduct is relevant and striking,” the filing reads.

The D.C. Circuit will hear arguments in the case on Jan. 3. The court will also hear arguments in the House’s bid to compel former White House counsel Don McGahn’s testimony that same day. House lawyers similarly rejected arguments that the impeachment vote mooted the McGahn case, saying information McGahn provides might serve as a basis for additional articles of impeachment.

For its part, the Department of Justice warned the D.C. Circuit against quick resolution of the McGahn case, lest it be seen as improper judicial intervention in the impeachment fracas.