Blast From the Past: Will the Army Bring Back Its "Linebacker" Bradley Troop Carrier? 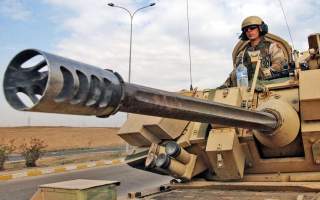 Key point: Why reinvent the wheel when an old weapons system will do? That's the thought behind resurrecting the anti-air Linebacker armored infantry vehicle.

This first appeared earlier in 2018 and is being reposted due to reader interest.

Sébastien Roblin holds a master’s degree in conflict resolution from Georgetown University and served as a university instructor for the Peace Corps in China. He has also worked in education, editing and refugee resettlement in France and the United States. He currently writes on security and military history for War Is Boring. This first appeared earlier in 2018 and is being reposted due to reader interest.