Blinken to Meet With Quad Leaders in Australia 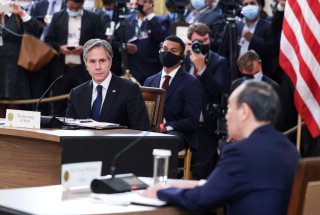 U.S. secretary of state Antony Blinken is scheduled to visit the Indo-Pacific region this week to “engage with Indo-Pacific allies and partners to advance peace, resilience, and prosperity across the region,” according to a press statement released by the State Department on Friday.

The trip is scheduled to take place between Monday, February 7, and Sunday, February 13, according to the statement. Blinken will visit Australia and Fiji before returning to the United States via Hawaii at the end of the week.

Assistant Secretary of State Daniel Kritenbrink indicated in remarks to the press that Blinken’s time in Australia would be devoted to security meetings between the United States and the other members of the “Quadrilateral Security Dialogue,” the Asia-Pacific alliance between the United States, Australia, India, and Japan. Kritenbrink said that the meetings, scheduled to take place in Melbourne, would lead to a greater formalization of the group’s role in each country’s security arrangements.

The “Quad,” as the alliance is often referred to, was first established in 2007 but grew in importance during the Trump and Biden administrations. The meeting in Melbourne is likely to precede an in-person meeting between the heads of state of the four countries in the spring—the second such meeting since a summit between the four leaders at the White House in September.

Although the Quad’s leaders have emphasized that the alliance is not intended to counter any country, many outside observers have suggested that its role is primarily to contain Chinese expansion in the Indo-Pacific region. Officials from all four Quad nations have boycotted the ongoing Winter Olympics in Beijing over human rights concerns.

After the Quad meetings, Blinken will travel to Suva, Fiji, to attend an international conference between leaders from eighteen nations on maritime security, fishing rights, climate change, and other issues. Kritenbrink noted that Blinken’s visit to Fiji would be the first by a current secretary of state since 1985.

Finally, Blinken is scheduled to attend meetings with Japanese and South Korean security officials in Hawaii regarding the three nations’ strategy toward North Korea. It is likely that the discussions will be dominated by Pyongyang’s recent spate of missile tests, including the country’s longest-range test since 2017 on Sunday.

Prior to his return to the mainland, Blinken is also slated to meet Admiral John Aquilino, the commander of U.S. Indo-Pacific Command, which governs U.S. military forces in the Pacific.