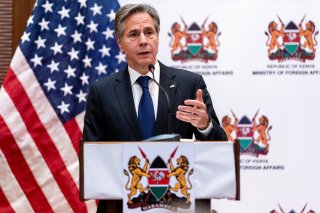 “We’d like to see the parties come together at the table to put in place the cessation of hostilities,” Blinken said during his meeting with Omamo. “We need to see humanitarian assistance flow freely now. We need to see [...] everyone engaging in an effort to resolve the differences that exist peacefully and constitutionally.”

Ethiopia has been in a state of escalating civil war for the past year. At the end of 2020, the government accused the TPLF, which had previously ruled the country from 1991 until 2018, of plotting unrest in the country’s northernmost Tigray province. Following an initially successful military intervention conducted in concert with Ethiopia’s northern neighbor Eritrea, TPLF guerillas routed the Ethiopian Army and forced it out of the province; they have since allied with ethnic Oromo separatist rebels and moved southward toward the capital, Addis Ababa—leading to the declaration of a state of emergency and a series of ethnically motivated arrests there.

So far, the conflict has killed thousands and displaced at least two million Ethiopians. War crimes have been alleged to have taken place on both sides, and the Ethiopian government, in particular, has been blamed for blockading the region, preventing international aid from entering Tigray, and potentially exacerbating a famine there.

Kenya, which shares its northern border with Ethiopia, has actively tried to mediate the conflict, reasoning that instability in Ethiopia could affect other nations in East Africa. On Sunday, Kenyatta visited Addis Ababa, where he negotiated privately with Abiy.

Blinken and Omamo indicated at a joint press conference that the conflict could not be solved militarily, and diplomacy could help to calm tensions before they escalated further.