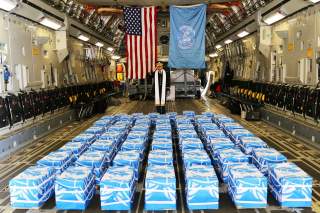 Key point: War is terrible, especially for forces that were used to lighter occupation duties. Every conflict leaves many dead and broken- the Korean War as no different.

Daniel L. Davis is a senior fellow for Defense Priorities and a former lieutenant colonel in the U.S. Army who retired in 2015 after twenty-one years, including four combat deployments. Follow him @DanielLDavis1. This first appeared in 2019.